Published by
Erick Burgueño Salas,
Apr 19, 2022
Increasing demand for air travel and transport during the 1900s led to the establishment of first airports to facilitate the landing of an aircraft, enplanement for passengers and loading of cargo. In Europe, the first commercial airport opened in Hamburg in 1911. Since then many more airports across European cities were built to advance the aviation industry and economy. In 2019, the number of passengers traveling by air in the European Union (EU-28) stood at over 1.1 billion. Over 226.7 million passengers traveled by air in Germany, making it the third-largest market after the United Kingdom and Spain.

A decade of growth wiped out by the coronavirus pandemic

Since 2010, the global air traffic passenger demand has been increasing steadily with at least four percent per year. During the same period, European passenger traffic experienced an even higher development trend. Although one observes a steady positive growth path over the recent years, the aviation industry is not exempt from the influence of economic shocks. The recent health crisis, namely the coronavirus (COVID-19) outbreak, led to a deep economic shock that affected the aviation industry severely. After losing 44.3 billion U.S. dollars in 2020, European airports are estimated to have further 37.5 billion U.S. dollars loss in revenue, while European airlines are estimated to record a net profit loss of almost 22.2 billion U.S. dollars in 2021.

The devastating impact of Covid-19 on Heathrow

When London Heathrow Airport (LHR) expanded in size in 2009, the airport was projected to be the largest passenger airport in Europe to meet the increasing air travel demand. In 2019, London Heathrow Airport was the busiest airport in the European Union but 2020 was one of the most challenging years for the UK airport. Revenue streams were down 62 percent, while passenger numbers plummeted from 80.9 million in 2019 to 22.1 million. Similar to London (LHR), Frankfurt Airport experienced a 55 percent loss in revenue and transported only 18.8 million passengers in 2020.

In the following 3 chapters, you will quickly find the 27 most important statistics relating to "European airports".

The most important key figures provide you with a compact summary of the topic of "European airports" and take you straight to the corresponding statistics.

Air transportation in the UK 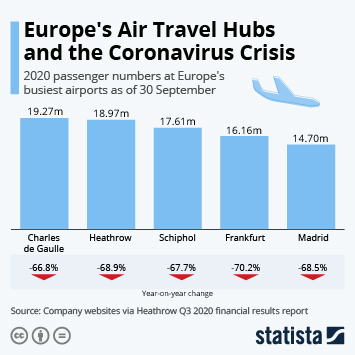