Published by
Erick Burgueño Salas,
Apr 19, 2022
In the past two decades, the number of people employed by airline companies registered in the United Kingdom (UK) has seen significant decline. Although figures had been slowly increasing again following severe cuts during the recession, numbers in 2019 were still noticeably smaller than in 2002. Between 2015 and 2019, cabin attendants were the most numerous out of all personnel. Overall, the civil aviation industry in the UK has been responsible for 1.4 million metric tons of greenhouse gas emissions in 2019, with figures having declined only slightly since 2009.

Spain makes up the majority of the passenger flow

The majority of passenger flow at UK airports could be attributed to flights from and to Spain and the Canary Islands, making up 17.3 percent of all movement in 2019. In general, the distance flown by UK airlines on international flights has been growing, suggesting that there were more flights offered for longer distances. At the same time, domestic flight distance traveled was decreasing, which may be attributed to people using other modes of transport for traveling within the country.

Leading airlines in the UK

In 2020, British Airways had the most passengers out of all UK-based airlines, with 11.66 million people transported. EasyJet followed with 11.42 million customers. In terms of kilometers flown, British Airways edged ahead of easyJet by roughly 262.1 million kilometers. This was unsurprising seeing as easyJet was focused mainly on flights within Europe, with additional routes offered to Morocco, Egypt, and Israel.

Leading airports in the UK

Heathrow was by far the largest airport in terms of passenger numbers, accounting for 30 percent of all movement, although its share had been declining in recent years with Luton Airport recording the greatest increase since 2010. Travelers at Heathrow were more likely to transfer to a different flight than at any other UK airport, while 66 percent terminated there.

In the following 4 chapters, you will quickly find the 29 most important statistics relating to "Air transportation in the UK".

Statistics on the topic
Number of passengers uplifted by UK airlines
32.35m
Number of people employed by UK-based airlines
64,725
Leading aircraft model in use
Airbus A320

The most important key figures provide you with a compact summary of the topic of "Air transportation in the UK" and take you straight to the corresponding statistics.

Airline passenger experience in the UK 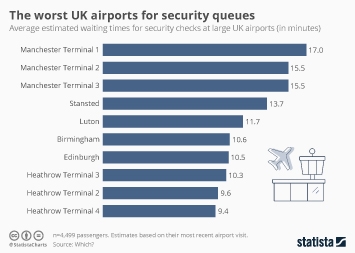