Published by Statista Research Department, Jul 13, 2021
No matter how eclectic the music taste, the likelihood of finding something among the many music festivals organized in France every year is high. International, regional, modern, or more classical music – there is something for everyone.
At the crossroads between cultural and social activity, festivals are often an opportunity to discover new artists, but also to enjoy numerous performances at a reduced price. Festivalgoers are often young, as the over-40s represent less than ten percent of the total audience. Festivals are also a bonding occasion for many visitors who expect to experience something exciting and have a good time with friends or family.

While international stars walk the stages of French festivals that bring together several thousand spectators every year, the Festival Interceltique de Lorient (Inter-Celtic Festival of Lorient) remains the most popular festival in France. The festival, which features many groups from countries and regions of Celtic origin in August, welcomed 800,000 of the 7.5 million festivalgoers in 2019. Festival attendance is constantly on the rise, with a five percent increase between 2018 and 2019. In 2017, a quarter of the live shows played in 2017 were seen in the context of a festival.

In 2019, newcomer French artist Suzane was the most featured artist at French festivals with a total of 32 appearances. The festival Printemps de Bourges featured the most popular artists, no small feat as the line-up is the number one decision criterion when choosing festivals.

Not only are music festival popular, they are also highly profitable endeavors. A fifth of all ticket sales were indeed generated during festivals and these amounted to a total of 191,452,717 euros in 2017. Unsurprisingly, the festivals that attract the most visitors are the most lucrative. In addition to the price of the ticket, festivalgoers are often keen to spend extra money on food and drinks, or even goodies and merchandising.

In the following 4 chapters, you will quickly find the 26 most important statistics relating to "Music festivals in France".

Statistics on the topic
Biggest festival by number of participants
Festival Interceltique de Lorient
Total number of festivalgoers
7.5m
Most common attendance frequency
Between once and five times a year 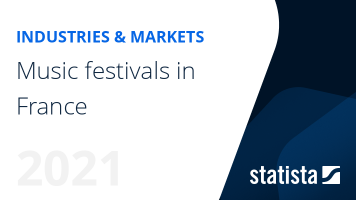 The most important key figures provide you with a compact summary of the topic of "Music festivals in France" and take you straight to the corresponding statistics.