Published by
Justina Alexandra Sava,
Feb 7, 2022
Virtualization refers to the use of software to create a virtual resource that runs on a layer abstract from the physical hardware. Cloud computing is one of the most common use cases. Virtualization allows a computing environment to run several independent systems – so-called virtual machines – simultaneously. These virtual machines share the same physical IT infrastructure and are managed and coordinated by an additional software interface named hypervisor.
This concept provides the possibility to make more efficient use of IT infrastructure resources. One example is segmenting server capacities into smaller parts that allows for the distribution of the server's capabilities among many users and environments. Notably, the technology has its origins in the 1960s and 1970s but took off in the 1990s and 2000s with the increasing demand for computing power. Today it is standard practice in IT enterprise infrastructure.

The global virtualization software market has a size of around 40 to 60 billion U.S. dollars currently and is expected to grow to at least 120 billion U.S. dollars over the next few years. Almost any type of IT infrastructure can be virtualized, including servers, desktops, networks, storage, data, applications, data centers, CPUs, and GPUs. Accordingly, virtualization is a critical building block of cloud computing.

Market growth is driven by a more general shift to the cloud, as well as automation of provisioning of resources and a need for cybersecurity solutions. Additionally, more frequent adoption of remote working models and an overall acceleration of digital transformation initiatives all call for an ability to scale operations virtually. Efficient use of resources through virtualization can also help organizations reach sustainability goals by reducing energy consumption.

As a result, more than half of businesses worldwide use virtualization technologies such as network function virtualization, SD-WAN, or desktop virtualization or have it on their future agenda. Accordingly, around 10 percent of IT software budgets are allocated to virtualization.

In the following 9 chapters, you will quickly find the 39 most important statistics relating to "Virtualization". 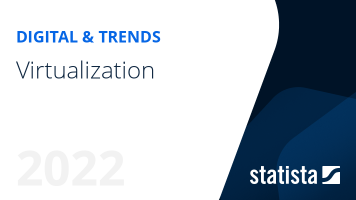 The most important key figures provide you with a compact summary of the topic of "Virtualization" and take you straight to the corresponding statistics.