Published by
Lai Lin Thomala,
Aug 13, 2021
The modern pursuit of beauty is unprecedented in China – about 1.05 million people underwent plastic surgeries in 2020, and a majority of them were females under 30 years old. It is a widespread belief among the younger generation that beauty is associated with upward economic mobility. The surging demand for medical aesthetics has turned into a 200-billion-yuan business, which would rake in another 100 billion yuan more by 2023. However, this lucrative market has brought other social problems: addictions, the proliferation of illegal procedures, and more dangerously, patients getting increasingly younger.

Why is buying a new face becoming a trend?

It can be easy to forget that the Chinese medical aesthetics industry barely existed 20 years ago. While the popularity of Korean pop culture has been soaring in China, Chinese people’s attitudes towards self-image has also been influenced by South Korea, where cosmetic surgery has become a part of daily life. In the early 2010s, more and more Chinese tourists were traveling to South Korea for aesthetics procedures. This hype peaked in 2016 when China’s beauty treatment and surgery sector entered a rapid development phase.

In fact, many Chinese young people deem having an attractive face as a crucial advantage in the workplace, which could bring them economic benefits. The obsession with celebrity culture and the booming influencer marketing has further reinforced such a belief. In 2016, the term “internet celebrity face” became the top buzz word, which refers to a “standard face” one should have to gain fame and fortune online. The facial features include big eyes, double eyelids, a high nose bridge, a pointy chin, and fair skin. Additionally, the growing affluence in the country has made Chinese consumers more generous in terms of self-indulgence. All these have propelled the popularity of medical aesthetics in China.

The dark side of plastic beauty

It comes as no surprise that many Chinese consumers opt for facial aesthetic procedures, as the face matters a lot in Chinese society. However, altering self-perceived physical flaws can become an unstoppable obsession. Clients who experience confidence boosts after surgeries often cannot resist the temptation to get more. On the other side, the medical aesthetics industry has been poorly regulated in China. Counterfeits and fakes are commonplace in the market. Industry malpractices like illegal clinics, unregistered practitioners, and smuggled medical substances are rampant. Yet there is another more alarming trend – the average age of customers is declining, in which one in five of the surgical patients were post-millennials. Alongside these trends, critics have raised concerns that underneath the rising desire to look good, sexism and inequality are becoming more deeply entrenched in the country.

In the following 5 chapters, you will quickly find the 28 most important statistics relating to "Medical aesthetics in China". 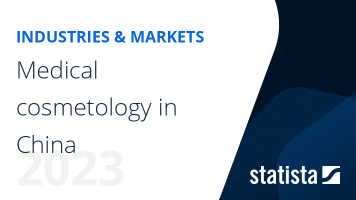 The most important key figures provide you with a compact summary of the topic of "Medical aesthetics in China" and take you straight to the corresponding statistics.

Cosmetic surgery in the United Kingdom