Published by
Conor Stewart,
Sep 28, 2018
Cosmetic surgery, or plastic surgery, is classified as a specialty surgery to reconstruct or alter aspects of the human body. It is a technical and intricate procedure that is mostly conducted by highly skilled consultants. Plastic surgery is often conducted following an illness such as breast cancer, after receiving severe burns or scarring as the result of incidental damage. However, cosmetic surgery is widely publicized in the media as a vanity or confidence boosting solution to low self-esteem, which is not always the case.
In the United Kingdom, the number of cosmetic procedures performed is on the rise, with fat reduction being the most desired type of surgery among men and women. Breast augmentation, blepharoplasty (eyelid surgery) and face/neck lift surgery were the leading three cosmetic surgery procedures conducted across the genders, with the number of procedures growing in recent years. Liposuction surgery, i.e. surgery to remove excess fat from different areas of the body, has grown in popularity over the past year, with the number of procedures conducted increasing by 20 percent. In correlation to the number of cosmetic surgeries conducted, the number of plastic surgeons in the UK has also increased.

Cosmetic surgery is not considered to be cheap, with the average unit cost estimated to be 2,950 British pounds. According to a survey conducted by YouGov, two thirds of individuals surveyed would not want to have cosmetic surgery, even if money wasn’t an issue. Overall, the survey found that individuals were satisfied with their bodies, particularly their genitals, with only one third of male respondents wanting a penis enlargement and over half of female respondents saying their breasts were the right size.

In the following 4 chapters, you will quickly find the 21 most important statistics relating to "Cosmetic surgery in the United Kingdom ".

The most important key figures provide you with a compact summary of the topic of "Cosmetic surgery in the United Kingdom " and take you straight to the corresponding statistics. 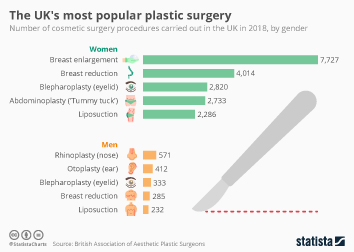