Published by Statista Research Department, Jan 3, 2023
Japan is one of the largest and most mature insurance markets in the world. The East Asian country records some of the highest life and non-life direct premiums written globally. Life insurance dominates the insurance market, fueled by a high life insurance ownership among households.

While Japan is home to some of the world’s largest insurance companies, the industry has been facing various challenges since the 1990s. The economic slump following the Bubble Economy of the late 1980s led to a decline of the insurance penetration rate, which until then had been the highest in the world. Life insurance premiums decreased during this time, while asset portfolios lost in value. During these years, the government liberalized the financial sector, which led to an increasing presence of foreign insurers and a restructuring of pricing regimes. As a result, insurance agencies, which are not bound to one specific company and can therefore act like brokers, gained in importance as a sales channel. The deregulation in general resulted in fiercer competition and a phase of consolidation. More recently, low interest rates and a declining population have posed further challenges for insurance companies. Facing a lacking growth potential in their domestic market, many companies decided to expand to overseas markets, increasingly engaging in M&A activities.

In the following 7 chapters, you will quickly find the 41 most important statistics relating to "Insurance industry in Japan". 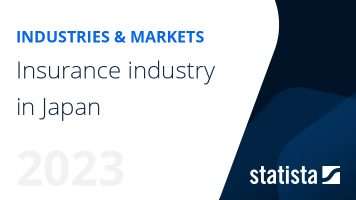 The most important key figures provide you with a compact summary of the topic of "Insurance industry in Japan" and take you straight to the corresponding statistics.