Published by
Jennifer Rudden,
Jan 26, 2022
As the name implies, insurtech intersects technology with insurance to create a more efficient, updated version of the traditional insurance industry. Having one of the highest insurance penetration in Latin America and the Caribbean, Brazil has been slowly but surely recognizing insurtech’s advantages and transforming the industry. This is especially apparent when considering the over 400 percent increase of InsurTech startups in the South American country throughout the past decade. Thus, it comes as no surprise that Brazil is home to most insurtech companies in Latin America.

Although the number of newly founded insurtech startups worldwide has decreased after peaking in 2016, the value of global funding for such companies has since exceeded two billion U.S. dollars each year. In Latin America, the Brazilian real estate and insurance company QuintoAndar has raised nearly 86 million U.S. dollars, making it the insurtech company to have received the largest venture capital investments in Latin America. Single investment deals can also make a large impact on the development of startups. In 2020, the Brazilian online insurance brokerage company, Minuto Seguros, collected the nation’s largest single insurtech investment deal, worth 60 million U.S. dollars. All in all, financial contributions to startups in this market represent an acknowledgement of insurtech's potential for improving Brazil’s insurance industry.

Technological innovation has been key to improving the delivery and efficiency of Brazil’s traditional sectors such as finance, insurance, and real estate, among others. Nevertheless, it has also simultaneously deepened gender inequalities in entrepreneurial activity in the South American country. For instance, no more than one fourth of startup shareholders among these newly transformed technology sectors are women. In the case of insurtech startups, more than 85 percent of the leading positions are occupied by men. Thereby, although the industry’s potential is undeniable, gender disparities must be tackled in order to fully recognize the advantages of the technological revolution of traditional economic sectors.

In the following 5 chapters, you will quickly find the 24 most important statistics relating to "Insurtech in Brazil". 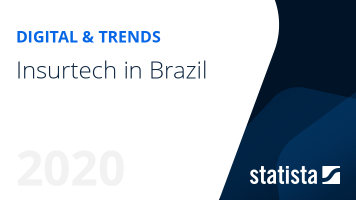 The most important key figures provide you with a compact summary of the topic of "Insurtech in Brazil" and take you straight to the corresponding statistics.