Published by Statista Research Department, Oct 27, 2022
When computers are the target of the offense, cybercriminals use their online presence for wrongdoing, for example through harassment or racist offenses. Child pornography, infringements on intellectual property, as well as illicit modes of digital consumption also belong to this category.
In the event that IT is the object of the crime, "hacking" would be the term most commonly used. This involves malicious programs which bypass a computer security system and steal confidential information. The dangers faced by businesses that fail to protect themselves from cybercrime are numerous. Among these, viruses, ransomware or malware programs, which penetrate organizations, mostly through e-mail accounts, social media networks, usually with the goal of blackmailing or stealing financial data.

A high price to pay

With a small discrepancy of opinion regarding the importance of cybersecurity, depending on the number of employees, most companies with less than 500 employees did not consider it to be a priority. However, as bigger companies have more to lose, the total of the IT budget of French firms amounted to 24.5 million U.S. dollars in 2019, with an average cybersecurity expenditure of about 2.1 million U.S. dollars, placing France at the top of the European ranking in terms of investments. French investments have proved to be fruitful, as mirrored in the average cost of all cyberattacks at 110 thousand U.S. dollars in 2019, this time putting France at the lower end of the European country ranking in terms of IT losses.
As IT experts state the number of cyberattacks has remained stable over the years, almost 60 percent of French organizations suffered a ransomware attack in the past year.
So, in order to not be handicapped by financial or data losses, 50 percent of French companies had a cybersecurity strategy in 2018, including measures to secure their IT system.

Types of threats and protection measures against cyber attacks

Facing challenges such as putting the governance of cybersecurity in a strong position, more than half of employees seem aware of the measures to protect their firm. Next to awareness, the most obvious preventive measures amongst companies were antivirus software and firewalls. Additionally, most companies had installed mail security, VPN / SSL gateways in 2020.
A sensitive data leak can quickly happen through employee negligence, for example, through an unencrypted computer. With fast computer threat responses occurring within a day, French businesses seem well prepared against rising attacks from within and outside the country.
It is the responsibility of managers to design and launch awareness-raising publications targeting employees. Relying on these channels and processes, a 2018 study suggested that attacks through viruses or hacking had the best success rate amongst desktop PCs and were not so successful with cloud-based systems. However, viruses can be adapted to new and complex software systems, which raises the question if rising company cloud systems will remain safe in the future.

In the following 5 chapters, you will quickly find the 29 most important statistics relating to "Cyber crime at companies in France ". 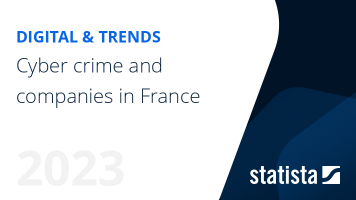 The most important key figures provide you with a compact summary of the topic of "Cyber crime at companies in France " and take you straight to the corresponding statistics.

Measures against cyber attacks on businesses

IT security in Italy

Cyber crime in the Nordics