Published by G. Wanat, Mar 4, 2022
The cinema industry has been one of the most successful markets in 21st century Poland, attracting an audience of almost 61 million in 2019 – a record number in the last decade. Furthermore, the Polish film entertainment industry witnessed a steady development and growth in new cinema openings between 2010 and 2019. However, as a result of the coronavirus (COVID-19) pandemic, this number decreased for the first time during the observed period. In 2020, the country offered a total of 511 cinemas to locals and visitors, with over 30 percent of all screenings showing domestic productions.

Polish cinematography in a nutshell

The Mazowieckie (Masovian) voivodeship was the undisputed leader in terms of cinema numbers in the region. Due to the widespread availability of cinema establishments in the country, the number of moviegoers per one thousand inhabitants almost doubled since 2010, reaching 1,608 cinema viewers in 2019. The increased interest in the film entertainment industry reflects in the share of movie productions. Polish cinematography is dominated by fiction films, which make up over 61 percent of all movies produced in the country.

As a result, the Polish film and television production industry provides employment to almost 15 thousand people. The cinema film distribution market value reached over one billion zloty in 2017 and kept growing until 2019. However, as a consequence of the COVID-19 pandemic, this value dropped to 331 million zloty in 2020. Furthermore, Kino Świat – one of the leading movie distributors and producers – saw a decrease of approximately 71 million zloty in net sales revenue in 2020 compared to the previous year.

The Mazowieckie’s (Masovian) leadership in terms of cinema facilities echoes in regional cinema audience numbers. In 2020, the voivodeship’s cinemas welcomed over 3.7 million movie viewers. Women constituted 51 percent of cinemagoers in the Polish cinema audience. Women were also more likely to visit a cinema with an accompanying person than men. Different cinema types are preferred depending on age groups. In general, commercial cinemas are most popular among Poles aged up to 30 years old, whereas older age groups prefer local establishments. Not everyone went to the cinema, however. The leading reason for not visiting cinemas was the preference for watching films in the comfort of one’s own home.

In the following 6 chapters, you will quickly find the 39 most important statistics relating to "Cinema in Poland". 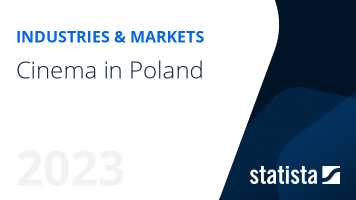 The most important key figures provide you with a compact summary of the topic of "Cinema in Poland" and take you straight to the corresponding statistics.