Published by G. Wanat, Mar 8, 2022
Digital media is a term used for any media that are encoded in computer-readable formats. As such, it is a combination of popular content and technology. Digital media covers a variety of industries, for instance: entertainment, e-commerce, education, technology, television, and many more. Consequently, digital media products are often found in gaming, websites, mobile applications, and social media. Thus, any content that is delivered through a screen – in a text, audio, video, or graphic format – is considered digital media.

Digital music refers to audio content that is distributed to the end-user over the internet. The Polish digital music market has been developing steadily over the years and is estimated to generate 145 million U.S. dollars in revenue in 2026. Music streaming remained the largest revenue-producing segment in the market, totaling 82 million U.S. dollars in 2021.
E-publishing constitutes another segment of the digital media market. The term is defined as paid editorial content distributed over the internet, thus including e-books, e-magazines, and e-papers. The segment has been attracting an increasing number of users since 2017, with e-books being particularly successful — by 2026, as many as 3.1 million Poles are expected to become e-book readers. In terms of e-publishing applications, Audioteka and Empik Go are the undisputed leaders and the most popular platforms used for e-book reading and audiobook listening in Poland.

Social media has been gaining popularity in Poland. According to the Statista forecast, there are to be approximately 32 million social media users in the country by 2026. Facebook and Instagram figure among the most downloaded social media apps. Most of the Polish Instagram users were aged between 18 and 24 years old. Furthermore, women were more likely to use the photo-sharing service; relatively few men had an Instagram account.
Nevertheless, men constituted a higher share of subscription video-on-demand (SVOD) services users. In 2021, there were over six million SVOD users in Poland. The Polish-American fantasy drama streaming television series, "The Witcher", was the most popular series among Polish internet users in 2020.
As mentioned before, music streaming has been an essential part of the Polish digital music market. Although Spotify was the most popular music streaming app in Poland as of January 2022, it was TIDAL - a Norwegian subscription-based music, podcast, and video streaming service - that had the highest earnings. Since 2015, TIDAL has generated over two million U.S. dollars in revenue in the country.

In the following 5 chapters, you will quickly find the 39 most important statistics relating to "Digital media in Poland". 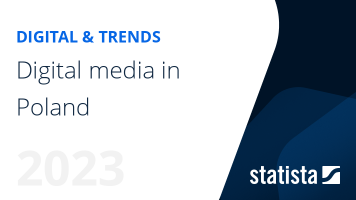 The most important key figures provide you with a compact summary of the topic of "Digital media in Poland" and take you straight to the corresponding statistics.

Digital Music in the United States