The Polish radio industry is divided into four different segments: nationwide stations, supra-regional stations, local stations and radio networks. The first two segments are the most important in terms of advertising campaigns, considering their widespread availability. The nationwide segment includes commercial radio brands RMF FM and Radio ZET, as well as the government-owned Polskie Radio and its four programmes (PR1, PR2, PR3 and Polskie Radio 24) – with all of these owning over 50 transmitters in the country. Meanwhile, the supra-regional segment consists of radio stations with a smaller technical stock, owning a few dozen transmitters to reach only residents of selected cities. Some examples of supra-regional radios include Tok FM, available in 23 cities, and RMF Classic, broadcasting in 21 cities.

Is radio a powerful media channel?

Radio reaches about two thirds of the Polish population daily, mostly by FM radio receiver. The radio is most popular among people aged 40 to 59 years old. Consequently, Poles are most likely to listen to the radio in their cars or in the comfort of their homes. With its widespread availability, radio users have regular access to news reports and related content.
In 2021, just under one third of Poles claims that they consider radio broadcasts as their main source of keeping up with the news. Radio especially is considered an essential news source among Polish seniors, aged 70 and older. Moreover, the daily reach of radio reflects in its advertising income. For most of the leading stations, advertising services have provided a steady income, with RMF FM recording the highest revenue in 2021.

RMF FM or Radio Zet - who is the market leader?

Throughout the years, the listenership share of RMF FM witnessed a steady growth, reaching nearly 30 percent of the Polish population at the end of 2021. As a result, it comes as no surprise that the Grupa RMF’s radio brand is the leading radio station nationwide, followed by another commercial station, Radio Zet. However, despite being the undisputed leader across the country, the majority of Polish capital residents actually prefer listening to Radio Zet, which reaches nearly 16 percent of Warsaw’s population. Belonging to Eurozet, a media holding company, Radio Zet is also the leader among online radio services. Considering these facts, it can be concluded that both RMF FM and Radio Zet are the two most influential radio brands across the country.

Digitalization of DAB+ radio in Poland

Digital Audio Broadcasting Plus (DAB+) is a digital standard for radio braodcasting that is expected to replace the traditional analog broadcasting in the future. The DAB+ technology allows for radio stations to broadcast digital sound quality, whereas the digital radio display offers song descriptions, releavant images, and traffic information to vehicles owners who listen to the radio. The sales volume of DAB+ digital receivers in Poland has seen a steady increase over the years. Moreover, the country's expansion plan for DAB+ network assumed that by the end of 2021, there would be a total of 64 broadcasting stations available in 17 regions.
This text provides general information. Statista assumes no liability for the information given being complete or correct. Due to varying update cycles, statistics can display more up-to-date data than referenced in the text.
Published by Statista Research Department, Dec 22, 2022 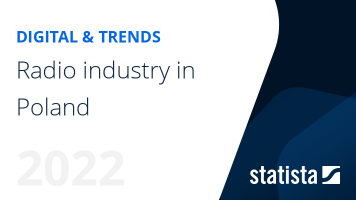 The most important key figures provide you with a compact summary of the topic of "Radio industry in Poland" and take you straight to the corresponding statistics.