Published by Statista Research Department, Jun 13, 2022
Medical devices encompass a wide range of products from diagnostic equipment such as x-ray apparatus and computer technology (CT) scanners, therapeutic equipment such as catheters and cardiopulmonary bypasses (CPB), to general equipment and supplies such as dental materials and surgical gloves. Japan is currently one of the largest producers of medical devices worldwide by revenue share. The domestic demand for medical devices is steadily increasing, likely due to the fast-aging population of Japan. In recent years, therapeutic equipment and devices had the highest sales share in Japan, both for domestic products and imports.
In terms of revenue, Olympus Corporation and Terumo Corporation are the largest domestic medical device manufacturers. Olympus generated more than half of its revenue from the endoscopic solutions segment. The company dominates the gastrointestinal endoscope field with about 70 percent of the global market share as of 2021. Terumo’s current main revenue stream is the cardiac and vascular segment, followed by sales from the general hospital equipment segment.

The regulation for medical devices in Japan was first enacted in the 2002 Pharmaceutical Affairs Law. It was amended and renamed the Pharmaceutical and Medical Device (PMD) Act in 2014. The 2014 amendment aimed to shorten the lengthy certification and legislature procedures for new medical devices that resulted in a problematic delay or device lag during the approval process. Initially, the Pharmaceuticals and Medical Device Agency (PMDA), founded under the jurisdiction of the Ministry of Health in 2001, evaluated all class III moderate to high-risk medical devices that could cause serious harm and class IV high-risk devices that could lead to fatalities.
In the 2014 amendment, the government expanded the range of medical devices that third-party private organizations can certify. This included some class III medical devices. According to the fiscal year 2018 report from the PMDA, the device lag was reduced to 1.4 years compared to three years reported in fiscal 2009. The most recent amendment of the PMD Act in 2019 targeted to further cut the pre-marketing review period for innovative products and introduced an early approval system for medical devices that treated rare illnesses. After the nationwide spread of the coronavirus disease (COVID-19), the disease-related devices such as new respiratory apparatus or artificial heart and lung apparatus received fast track approval by the PMDA and the health ministry.

To facilitate the development of innovative medical devices domestically, the government established the Japan Agency for Medical Research and Development (AMED) in 2015. AMED promotes the research and development (R&D) of medical devices that integrate artificial intelligence (AI), Internet of Things (IoT) technologies, robotics technologies, 3D or 8K resolution imaging technologies, as well as other technologies. The Medical Imaging Projection System (MIPS), for example, was developed by Mitaka Kohki Co., Ltd., Kyoto University, and Panasonic Corporation with the support of AMED. MIPS is the world’s first surgery assisting system that operates with projection mapping. It was approved by the PMDA in 2019 for manufacture and sales. The average annual R&D expenditure of Japanese medical device manufacturers showed an increase in recent years, exceeding two billion Japanese yen in fiscal 2020.

In the following 7 chapters, you will quickly find the 37 most important statistics relating to "Medical device industry in Japan". 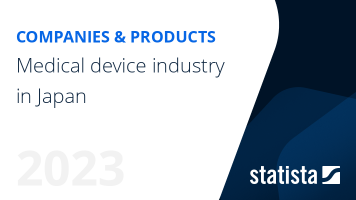 The most important key figures provide you with a compact summary of the topic of "Medical device industry in Japan" and take you straight to the corresponding statistics.