Artificial intelligence (AI) is a technology that is becoming more and more important for developed economies. This development is reflected by global AI revenues, which are expected to increase strongly in the coming years. In Japan, as well, artificial intelligence is seen by many as key to future developments. The Japanese government considers AI one of the central elements that will contribute to “Society 5.0,” a vision of society in which the physical space and cyberspace are increasingly interconnected. The anticipation surrounding AI has led to increased research activities both among institutions and private enterprises. The number of AI-related patent applications recorded by the Japan Patent Office has grown strongly since 2014, leading up to what has been called Japan’s third AI boom.

Among the leading companies based on the number of AI-related patent applications are many of Japan’s major technology corporations, such as Fujitsu, Nippon Telegraph and Telephone (NTT), Hitachi, Canon, or Toyota. Many of the companies engaging in related research are active in the automotive, robotics, and electronics industries, where artificial intelligence is expected to contribute significantly to applicable areas such as autonomous driving or industrial automation. Artificial intelligence also plays a vital role in smart devices and smart home technology, which are supposed to make people’s daily lives easier and to enhance the energy efficiency of products. As one of Japan’s leading companies, Toyota has garnered attention with its “Woven City” project, a smart city prototype where new technologies, such as AI, can be implemented for research purposes.

Implementation of AI at companies

Since AI is expected to perform many tasks that hitherto have been performed by humans, it is expected that its implementation will have wide-ranging effects on employment in Japan. One important factor to consider in this regard is the future demographic development, as the population is expected to age even further and to shrink significantly in the coming decades. Next to alleviating labor shortages, the implementation of AI is also thought to help companies in reducing costs and improving efficiency. According to survey data, the most common business operations for which AI is used include forecasts of demand and sales, analysis of customers and optimization of business processes, as well as inventory optimization. This can also be beneficial to employees, for instance by enabling them to reduce working hours or to focus on other tasks. A ranking of the leading reasons for not implementing AI shows, however, that many companies lack personnel that could lead the implementation process, while others are unsure about the potential merits or the results in relation to the costs.
This text provides general information. Statista assumes no liability for the information given being complete or correct. Due to varying update cycles, statistics can display more up-to-date data than referenced in the text.
Published by Statista Research Department, Nov 22, 2022

Implementation of AI at businesses 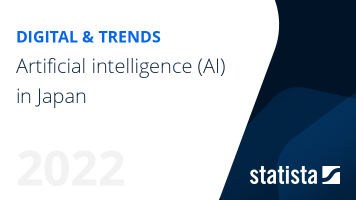 The most important key figures provide you with a compact summary of the topic of "Artificial intelligence (AI) in Japan" and take you straight to the corresponding statistics.