64 percent of the French wanted to go hiking during their 2020 summer vacation. Hiking or walking is indeed a trendy sport in France, and the most practiced, far ahead of tennis or soccer. However, despite the very accessible aspect of the activity, the reasons for the success of hiking are more diverse.

Hiking: a return to nature

With increasing urbanization came a renewed interest in a return to nature. French authorities and institutions began developing and expanding outdoor activities. In 1936, with the introduction of paid vacations for employees, the first campsites appeared. In the 1930s, the first ski resorts emerged on French mountain slopes.
Organized outdoor activities and hiking became more popular after the Second World War, though still mostly reserved for wealthier people. The first sections for the Grande Randonnée (GR) trails were laid out in 1947. Today, the French Hiking Federation, which is in charge of hiking trails, counts several dozen GR trails, which compete each year for being named the favorite in France. The 2020 winner is the GR21 along the Normandy coastline.
The hiking paths precede the national desire to protect certain natural spaces by a few decades. Laws and decrees establishing national and regional parks were put in place in 1960 and 1967. Preserved in varying degrees from human activities, these areas are popular with hikers in metropolitan France and overseas regions. In 2019, France had 11 national parks and more than 50 regional parks.

In France, hiking is mostly practiced by older participants. The most numerous age group among the members of the Fédération Française de Randonnée is 65-69 years. Hiking was also the most common sports activity among French seniors, far ahead of swimming or cycling. Hiking is essentially autonomous, only nine percent of hikers said they joined a club. Its popularity can also be explained by the accessibility and the pleasure of walking, which, additionally, is not expensive. Moreover, the majority of French hikers say they are "beginners".

In 1989, the Grand Raid de la Diagonale des Fous was created on Réunion, a 164 kilometer long race through the steep volcanic island massifs. Like the Ultra-Trail du Mont-Blanc, this new type of race is attracting more and more people, as well as younger participants.
Nordic walking has become more widespread in the last twenty ears. Originating in Scandinavia, this activity consists of accelerated walking with special sticks. France has many Nordic walking clubs in Île-de-France and New Aquitaine.
This text provides general information. Statista assumes no liability for the information given being complete or correct. Due to varying update cycles, statistics can display more up-to-date data than referenced in the text.
Published by Statista Research Department, Jul 30, 2021

Most practiced activity by French people aged over 65
Hiking

Frequency of activity by hikers in France 2018 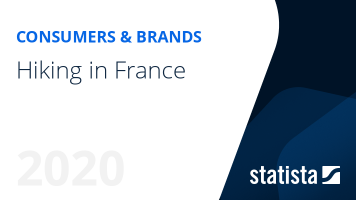 The most important key figures provide you with a compact summary of the topic of "Hiking in France" and take you straight to the corresponding statistics.