French resorts recorded more than 55 million skier visits during the 2018-2019 season, the highest number in the world behind Austria. This performance is the result of a combination of ideal natural conditions, numerous mountain massifs and an early willingness of the state to develop a large network of ski resorts. However, several resorts are sounding the alarm, as global warming could have dramatic consequences for their activities.

Far from the image of the vast plains and dense forests of northern France, the southern half of France is, on the contrary, rather steep and mountainous. The Pyrenees line the French-Spanish border, with several peaks exceeding 3,000 meters. The center and the north-east are home to the Massif Central, Jura and Vosges, with a medium mountain range between 1,000 and 2,000 meters. But the highest French summits are located in the Alps. Mont Blanc and the Alps in general have been attracting tourists for more than a hundred years. As early as the 19th century, Mont Blanc was one of the stops for wealthy British travelers on their Grand Tour in Europe. Since then, French authorities have been able to develop the infrastructure to attract even more tourists looking for adrenaline. In the Alps alone, there are more than 175 resorts. In terms of attendance, the Alpine resorts represented 86 percent of the number of skier-days.
Skiers are not evenly distributed over all French resorts. The largest hosted 39 percent. Only 15 of these mega-stations are counted. These giants are usually comprised of two or even three stations that are linked together. The resorts are also located at higher altitudes, offering its skiers a greater variety of slopes and a more constant snow cover. However, these facilities have a knock-on effect, which is reflected in the price of the package. A six-day Mont-Blanc Unlimitied ski pass, for example, cost 372 euros per adult in 2020.

The price of ski passes and accommodation at resorts limits access to skiing. In 2018, 22 percent of young French people went skiing every year. Among workers, only four percent had gone skiing in the last 12 months that same year. To reduce inequalities of access, the state allows younger students to discover the summits during snow class weeks in primary and secondary schools. The Macron government also wants to relaunch these programs on a massive scale in France.
Ski resort clientele is 75 percent French. French authorities wish to internationalize in order to gain new customers. The regional tourism committee of the Auvergne-Rhône-Alpes region is lobbying for the opening of a direct line between China and Lyon airport. Additional activities have also been created to attract a younger clientele. In March 2019, the winter version of the Tomorrowland Festival took place in the Alpes d'Huez. Local airports such as Grenoble-Alpes-Isère have gradually abandoned their domestic connections to focus on international flights.

Although every precaution is taken to ensure safety, by their very nature, winter sports are risky practices. Injuries are frequent and every athlete has an Achilles' heel: the wrist for snowboarders and the knees for skiers. Off-piste, accidents can be much more dramatic. Despite the precautions taken by municipal authorities to prevent avalanche risks, each year, several fatalities are recorded.
The risk is also an economical one. Global warming is leading to a decrease in snowfall periods. Since the end of the 1980s, the years without heavy snowfall are more and more frequent. The use of cannons will not be enough to guarantee snow on all slopes from December to April. Small and medium ski resorts are the most affected by this. Moreover, the number of active resorts has been decreasing since 1990.
This text provides general information. Statista assumes no liability for the information given being complete or correct. Due to varying update cycles, statistics can display more up-to-date data than referenced in the text.
Published by Statista Research Department, Jul 30, 2021

Europe: share of people who ski as of 2021, by country

Favorite month of the year to go skiing in France
February

Breakdown of skier-days by mountain range in France 2016-2019

Europe: number of people who ski as of 2021, by country

Europe: number of ski areas in 2021, by country

Most frequent injuries diagnosed for skiers in France 2019/2020

Number of skiers in France and Europe 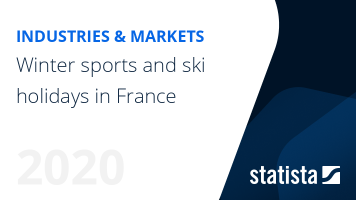 The most important key figures provide you with a compact summary of the topic of "Winter sports and ski holidays in France" and take you straight to the corresponding statistics.

Skiers in France and Europe