Published by
Erick Burgueño Salas,
Apr 19, 2022
Air travel became one of the main means of transport for millions of individuals across countries to travel long distances in a shorter time. The expansion of intercontinental trade relations and the interest of people to explore the world are some of the reasons triggering the rapid growth of the global aviation industry. During the last 15 years, global air traffic increased by more than two-thirds, reaching roughly 39 million flights carried out in 2019. However, there is a significant cost of flying on the environment through carbon dioxide (CO2) emissions and other pollutants. In 2019, commercial aviation firms emitted over 900 million metric tons of CO2, which is an increase from 627 million metric tons of CO2 emissions in 2004. In 2020, the majority of passenger aviation activities were canceled across the globe due to the coronavirus (COVID-19) pandemic. As a result, the aviation industry experienced a roughly 60 percent decline in CO2 emissions during 2020 compared to 2019.

The push force for climate action by individuals and international regulatory bodies incentivize airline groups to react and adjust their long-term strategies for sustainable development. Research and development already have shown an indication for optimism for the emissions of aviation groups. In December 2020, Lufthansa Cargo carried out the world’s first eco-friendly flight using sustainable aviation fuel for its Boeing 777F cargo aircraft between Frankfurt, Germany and Shanghai, China. Emission intensity is a factor which airlines could minimize through technologically advancing the airplane fleet in use. During 2020 in Europe, Wizz Air had the lowest level of carbon dioxide emission intensity amongst other airlines globally, with 57 grams of CO2 per revenue passenger kilometer (RPK). On the other hand, Lufthansa emitted roughly 92 grams of carbon dioxide per revenue passenger kilometer in the same period. Considering the global carbon emission goals determined by the 2015 Paris Conference, airline groups still lag behind ideal levels of CO2 emissions.

The invisibility of this environmental cost in ticket prices makes millions of people simply reluctant to bear the responsibility of abatement. Increasing awareness concerning the carbon footprint of flying and global climate change negotiations trigger a multidimensional approach to mitigate the environmental damage of the aviation industry. In this regard, both individual airline groups and countries are involved to make both a more environmental friendly flying practice and offer alternative modes of transportation to aviation, such as for domestic travel. In a 2020 survey, roughly 39 percent of individuals responded that they have recently started to pay more attention to air travel sustainability. Additionally, 27 percent of respondents revealed that they aim to take fewer flights in the future to limit their carbon footprint. In a country distribution, more than one-third of surveyed individuals in the UK stated that they are concerned about the environmental impact of flying.

The protection of the environment is a public goods problem where each airline firm has an incentive to deviate from global commitments, which is one of the main reasons why airline groups cannot reach a binding agreement on how to abate potential environmental catastrophes. Despite global negotiations for climate action, the CO2 emissions level from international aviation between 1990 and 2019 increased by 2.5 times, indicating an alarmingly high growth rate. According to a forecast with two post-coronavirus (COVID-19) scenarios, international aviation is expected to emit 1.5 billion tons of CO2 by 2050 if airline groups will exert environmental protection efforts that are not sufficient enough. Between 2019 and 2050, only in China the carbon dioxide emission levels are estimated to triple, reaching 371.6 million metric tons of CO2 emissions by 2050. Although global forecasts depict a gloomier outlook, the future is an uncertain journey and not always the past trends resemble the future. Given sudden technological advancements, it could be the case that aviation becomes a CO2 neutral industry in the future.

In the following 5 chapters, you will quickly find the 25 most important statistics relating to "Environmental impact of the aviation industry worldwide".

Environmental pollution in the U.S. 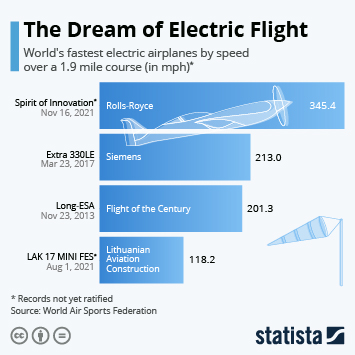 World's fastest electric airplanes by speed over a 1.9 mile course