Published by Ian Tiseo, Jun 21, 2022
Pollution occurs when harmful substances enter and contaminate the natural environment. While pollution can occur naturally, human-made pollution over the past century has caused significant damage to the world and its inhabitants. The main types of environmental pollution are air, water, and land pollution. Pollution exposure is a growing concern in the United States as it affects large swathes of the population.

Air quality in the U.S.

The burning of fossil fuels is a leading cause of air pollution, especially through transportation, industrial activities, and power production. These sectors release several types of pollutants into the air, but one of the most harmful is PM2.5. These tiny particles are known to cause respiratory problems in the lungs and can affect hearts. The state of California has some of the most polluted cities in the U.S., with many having PM2.5 levels far greater than the recommended limit. Despite a decline in air pollution in recent decades, poor air quality remains a serious health hazard in the U.S., with approximately 60,000 deaths attributable to air pollution each year.

There is currently a water crisis in the U.S., with clean and safe water not always a guarantee. This is mainly due to the release of chemicals to water bodies from farm runoff. It has been found that millions of people in the U.S. are served drinking water with elevated nitrate levels. This poses serious health risks to millions of people. Toxic fluorinated chemicals (PFAS) (or forever chemicals) have also been detected in tap water samples across the country. One of the most high-profile examples of water pollution in the U.S. was the Flint, Michigan water crisis that lasted from 2014 to 2019. During this time, thousands of residents were exposed to drinking water contaminated with lead, causing a major public health crisis.

Contaminated land in the U.S.

Land pollution is another serious issue facing the U.S. Every year Americans generate roughly 300 million tons of municipal solid waste, half of which is dumped at landfill sites. The U.S. is home to some of the world’s largest landfill sites – such as the Apex Regional in Las Vegas, where more than 10,000 tons of waste is dumped daily. There are also more than 1,300 hazardous waste sites in the U.S., with the largest number of these Superfund sites found in New Jersey and California. Superfund sites get their name from the law that was passed in 1980, which allowed the Environmental Protection Agency to identify the most contaminated sites in the U.S. and make the parties responsible clean them up or carry out the cleanup themselves using the Superfund. These sites include, amongst others, old mines, oil refineries, and landfill sites.

In the following 4 chapters, you will quickly find the 25 most important statistics relating to "Environmental pollution in the U.S.".

The most important key figures provide you with a compact summary of the topic of "Environmental pollution in the U.S." and take you straight to the corresponding statistics.

Transportation emissions in the U.S. 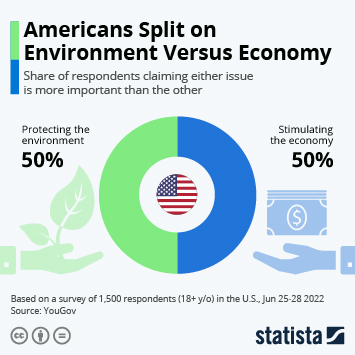 share of respondents claiming either environment or economy is more important 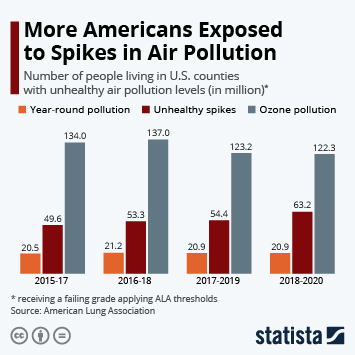