Published by
Justina Alexandra Sava,
Jan 25, 2022
Smart cities are generally defined as locations where digital and telecommunication technologies are used to make the use of resources more efficient. Its reach is always expanding and already applies to a myriad of aspects of daily life – from communication to mobility, from shopping to one’s own home. In fact, technology spending on smart city initiatives worldwide was forecast to more than double between 2018 and 2023, amounting to approximately 190 billion U.S. dollars in the latter year. While Latin America’s participation in the sector’s spending was estimated at less than ten percent in 2020, in recent years projects have been gaining space in the region.

Latin America lags in smart city spending, when compared to China and Japan, for example. Nevertheless, the underlying structure for smart cities development in the region continues to make progress. Internet access is one of the most important conditions enabling the development of smart cities. In 2019, there were nearly 350 million mobile internet users in Latin America, accounting for more than half of the region’s population. By 2025, another 80 million users are forecast to start accessing the internet through the screens of their smartphones. Meanwhile, between 2018 and 2025, the number of internet of things (IoT) connections in Latin America is expected to increase by nearly 150 percent, with the sector of smart homes accounting for the largest number of new connections.

Connectivity inside the home

Like smart cities, the term smart home refers to a residence where appliances or devices can be controlled and automated via an internet connection. The sector includes, among others, domestic appliances, security and lighting systems, and home entertainment devices. In 2019, the number of smart homes in Latin America was estimated at more than nine million and was forecast to surpass 23 million by 2025. In that latter year, this would represent a smart home market revenue of close to seven billion U.S. dollars. The smart appliances segment alone is expected to account for over 40 percent of the sector’s revenue, followed security and control and connectivity.

In the following 4 chapters, you will quickly find the 20 most important statistics relating to "Smart cities in Latin America". 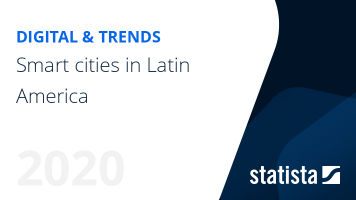 The most important key figures provide you with a compact summary of the topic of "Smart cities in Latin America" and take you straight to the corresponding statistics.