With around 533.17 million internet users in 2021, Latin America and the Caribbean is the fourth largest regional online markets in terms of users worldwide, behind Asia, Europe, and Africa. The vast territory and diversity of political and economic scenarios make access to the service a topic of inequality across the continent. With an average internet penetration rate of 68.8 percent in Latin America, the subregion of South America had the highest online penetration, with around 75 percent of its population having access to the web.

Chile holds the top position regarding internet access among all the Latin American countries, with 92 percent of its population connected to the web. With the biggest population in the continent, Brazil also has the region’s largest online audience, with around 165.3 million internet users in 2022, more than Mexico and its neighbor Argentina combined. However, the country does not rank among the top ten regarding access to the internet throughout the region.

Meanwhile, the Caribbean had a gap of almost 9 nine percentage points fewer than South America, as Central America stood in between with an internet access rate of 70 percent. But the growth in mobile connectivity is radically changing the picture for some countries. This is the case for Peru, where the internet penetration in rural areas grew from 41.5 percent in 2019 to 68.7 percent in 2021, helping the country to rise to the fifth position of the largest markets in the region.

As access to the internet grows, so does the presence of social media. With around 490 million users in 2022, Latin America is the fifth-largest market for social media platforms worldwide. While Brazil and Mexico had the largest audiences of these platforms, Chile also had the highest social media penetration rate among all countries, with around 92.8 percent of its population accessing social networks.

Social networks are the most accessed type of media in the continent. This preference is also reflected in the fact that staying in touch with family and friends is one of the most popular reasons to access the internet in the region’s largest markets. But social media platforms are also a major drive to the region’s booming online shopping market, being used by more than 60 percent of platform users to research brands and find products.

Latin America had approximately 295 million e-commerce users in 2022, with e-commerce revenues amounting to more than 104 billion U.S. dollars in 2022 and projected to grow up to 160 billion U.S. dollars in 2025. Brazil remains the biggest regional market, with around 78 percent of its population shopping online. However, after the boom in e-commerce generated by the COVID-19 pandemic in 2020, Mexico and Chile experienced remarkable growth in their online retail segments.

The best example of the sector’s success in the region crosses Latin America’s national borders: the online shopping platform MercadoLibre increased its annual revenue by 78 percent to more than 7 million U.S. dollars between 2020 and 2021. Despite its headquarters based in Buenos Aires, Argentina, more than half of MercadoLibre's platform sales came from Brazil, although Mexico has been increasing its share of the company’s net revenue from 12 percent in 2019 to more than 16 percent in 2021.

Internet in Latin America is a dangerous territory, with a much higher rate of cyber attacks compared to any other region worldwide. Brazil and Ecuador are among the two most targeted countries for online attacks, especially for mobile users. Internet users from both countries were particularly prone to suffer phishing and malware raids. Internet users in Latin America experienced more than double the global average desktop cyber attack rate and significantly higher mobile attack rates (browser and apps) than online users in the rest of the world. Due to the predominance of mobile connectivity in the region, it is also no surprise that most of web attacks originating from Latin America also come from mobile devices.
This text provides general information. Statista assumes no liability for the information given being complete or correct. Due to varying update cycles, statistics can display more up-to-date data than referenced in the text.

Tiago Bianchi
Research expert covering internet & gaming in Latin America and Spain
Get in touch with us now
Published by Tiago Bianchi, Jan 12, 2023

Number of internet users in Latin America & the Caribbean
543.39m

Number of internet users in Latin America 2022, by country

Internet penetration in Latin America and the Caribbean 2022, by country 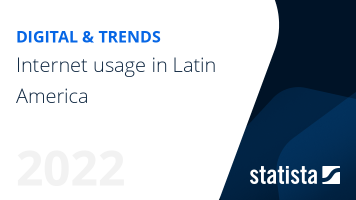 The most important key figures provide you with a compact summary of the topic of "Internet usage in Latin America" and take you straight to the corresponding statistics.