Coffee is very popular in Poland - the hot beverage accompanies every third Pole’s morning. With caffeine so present in Polish people’s everyday life, the country’s coffee revenue is expected to increase by 9.3 percent in 2022. Moreover, since 2014, the coffee import volume has been on the rise. Polish consumers are especially in favor of German coffee; the neighboring country constituted about 41 percent of Poland's coffee import share in 2020. Thus, Germany is the largest and undisputed exporter of coffee products to Poland.

Between 2010 and 2019, the tea and coffee processing industry has welcomed 147 new enterprises. At the same time, the industry has employed at least four thousand individuals. In 2020, the employee number exceeded 4.6 thousand. Despite this, the production volume of roasted coffee has fluctuated since 2013, amounting to approximately 38.4 thousand metric tons in 2020.
In 2020, the average Polish consumer was drinking 190 grams of coffee per month – a slight increase compared to the previous year. In terms of gender distribution, women constituted approximately 55 percent of Polish coffee drinkers. According to a survey conducted in 2021, one in four Poles reported consuming two cups of coffee per day on average.

How do Poles take their coffee?

Central European Slavs are primarily drawn to coffee because of the taste. One of the most valued coffee qualities is the taste and aroma of the dark beverage. Moreover, outdoor coffee drinking is the norm, with a gas station being a favorite consumption location for over 70 percent of people. Although chain cafés are also popular, they lose to different venues among Poles in every age group. Nearly every second Polish teenager likes to drink coffee in fast food chains, whereas older Poles have a tendency for visiting traditional restaurants. In 2021, espresso was the most popular ready-to-drink (RTD) coffee among Polish consumers.
Coffee chain wise, Starbucks is by far the most popular, with almost every fourth person in Poland showing their preference for the brand. The American coffee brewing giant’s popularity comes as no surprise, considering that it is also the largest coffee chain in the country. In 2019, Starbucks celebrated its ten-year anniversary in Poland. During this time, 73 Starbucks coffee houses were opened. However, by 2021, this number decreased to 69 coffee shops.

Within the last decade, a new trend appeared on the Polish coffee market. Between 2010 and 2019, coffee machine sales rose by almost 380 percent. This led to an increase in the value of the coffee machine market in Poland, which reached 825 million zloty as of the third quarter of 2021. The rising sales of private coffee makers suggest that Poles are slowly but surely leaning towards the idea of drinking coffee in the comfort of their own homes. In 2021, Dolce Gusto was the most popular capsule coffee brand in Poland, followed by Tassimo and Nespresso. Those in favor of experiencing an indoor coffee ritual could purchase a quarter kilogram of natural ground coffee for an average price of 7.57 zloty in 2020.
This text provides general information. Statista assumes no liability for the information given being complete or correct. Due to varying update cycles, statistics can display more up-to-date data than referenced in the text.
Published by G. Wanat, Mar 4, 2022

Per capita monthly consumption of coffee in Poland 2010-2021 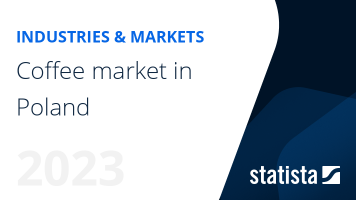 The most important key figures provide you with a compact summary of the topic of "Coffee market in Poland" and take you straight to the corresponding statistics.