Tea is one of the most popular and widely consumed hot beverages in Poland. In fact, the country’s tea and coffee processing industry revenue is forecast to exceed 1.22 billion U.S. dollars by 2025. In 2022, tea market revenue growth is set to reach 5.33 percent. This is a major increase considering that the prior years, 2019 and 2020, have been marked by a decline in revenue.

Poland is also the largest tea producer in the Central and Eastern European (CEE) region in terms of value. Although the value of tea production fluctuated in recent years, the undisputed leader started the new decade with a tea production value of just over 243 million euros, coming very close to the all-time record value. With tea production value growth, another rise followed elsewhere within the tea segment. Between 2018 and 2020, the average retail price of black leaf tea increased by over 3.5 zloty. This change reflected in the average monthly per capita spending on tea, which reached 5.21 zloty that year.

Zooming in on Polish consumers, they tend to drink 50 grams of tea on a monthly basis - a stable trend since 2016. Women are generally bigger tea enthusiasts, constituting around 54 percent of total tea consumers. Nevertheless, Poles are also aware of different teas. For instance, Earl Grey and yerba mate are the most recognized tea types among consumers. Last but not least, the most popular tea brand and the undisputed leader in Poland is Lipton, a British brand owned by Unilever.
This text provides general information. Statista assumes no liability for the information given being complete or correct. Due to varying update cycles, statistics can display more up-to-date data than referenced in the text.
Published by G. Wanat, Mar 31, 2022

Favorite brands of tea in Poland 2022

Per capita monthly consumption of tea in Poland 2010-2021

Share of people who drink tea in Poland 2021, by age group 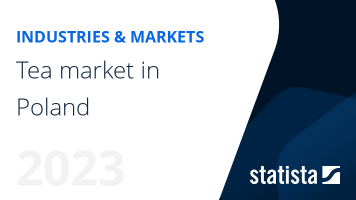 The most important key figures provide you with a compact summary of the topic of "Tea market in Poland" and take you straight to the corresponding statistics.