Coffee, a beverage which is an important part of the Nordic culture, is prepared from roasted coffee beans and has a high caffeine content. The hot beverage even has the status of a national drink in Denmark, Norway, Finland, Sweden, and Iceland. In 2020, Fins were the second most avid drinkers of the hot brew worldwide, followed by Swedes and Norwegians.
When people in Iceland go shopping for coffee, they will find Merrild coffee on supermarket shelves. It is a popular brand in Iceland, as well as in Denmark, where it originally comes from. Norwegians enjoy the domestic Evergood Kaffe. One of the brands on the Finnish market is called Paulig. In Sweden, a major domestic brand is Löfberg coffee. In 2020/21, most coffee beans purchased for the production of Löfberg coffee came from South America, which is one of the leading coffee growing regions.

None of the Nordic countries grows coffee. Thus, they are dependent on trading partners. Recently, the largest supplier of coffee imports to Sweden was Brazil, with a value of 941 million Swedish kroner. Generally, the Swedish coffee retail trade generated increasing sales revenues in the past; especially organic coffee became more popular among consumers.

Denmark, being one of the leading countries in Europe when it comes to organic products, sold organic coffee in retail shops with a revenue of 336 million Danish kroner in 2020. In Danish households, coffee is of high value, illustrated by a household expenditure of approximately one thousand Danish kroner that same year.

The Statista Consumer Market Outlook estimates revenue in the coffee segment to reach nearly five billion U.S dollars in Norway by 2025. In recent years, roast coffee accounted for most of the revenue. Same as in the neighboring Scandinavian countries, Norway imports a high value of coffee. According to preliminary figures for 2020, the import value amounted to almost 2.1 billion Norwegian kroner.
This text provides general information. Statista assumes no liability for the information given being complete or correct. Due to varying update cycles, statistics can display more up-to-date data than referenced in the text.
Published by M. Ridder, Apr 6, 2022

Import value of coffee and coffee substitutes into Sweden 2010-2021

Annual sales revenue of coffee for the retail trade in Sweden
6,897m SEK

Per capita consumption of roasted coffee in Sweden
7.7kg 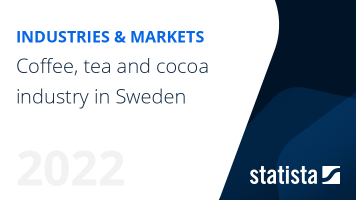 The most important key figures provide you with a compact summary of the topic of "Coffee market in the Nordics" and take you straight to the corresponding statistics.