Published by
Nina Jobst,
Jun 8, 2022
The South Korean fashion market size was forecast to amount to over 43.3 trillion South Korean won. Recently, the Korean fashion market has continued to decline due to the global economic downturn and the coronavirus outbreak. In the meantime, the luxury goods and bags market, the trendy street casual wear market, and the sports shoe market were leading the growth recovery of the fashion market. Impacted by the COVID-19 pandemic, the market for comfortable clothing such as loungewear and athleisure wear has grown significantly due to the increasing population working from home and staying at home.

The Korean apparel market has grown significantly over the past 20 years, and the market structure has experienced constant change. The formal wear market, which once occupied more than half of the fashion market in the early 2000s, is now only about 17 percent. Due to the influence of the business casual trend, consumption of formal wear items shifted to the casual wear and sportswear market. In addition, the consumption of formal wear is expected to further stagnate in the future following the social restrictions due to the COVID-19 pandemic. South Korean male consumers purchased their formal wear mainly at department stores, followed by outlets and brand shops. For female consumers, department stores were the most preferred place to purchase their business wear, with outlet malls, and non-store shopping using online or home shopping following.

Contrary to the stagnation of the formal wear market, casual wear occupies an increasing proportion of the Korean apparel market. While many apparel items recorded negative growth, the casual wear market has recorded an average annual growth rate of 2.8 percent over the past five years. In the Korean casual wear market, T-shirts accounted for the largest portion, followed by pants, shirts, and jackets. In terms of purchase channels, Korean consumers preferred to buy their casual wear via non-store retailing such as online shopping or TV home shopping. Formerly, Uniqlo had the leading position as the most purchased casual brand in South Korea. However, due to the 2019 boycott of Japanese products in South Korea, the brands popularity dropped significantly. Other domestic brands, such as Hazzys and Beanpole, have taken over the lead. Other than brand products, both male and female consumers stated to purchase non-branded casual wear the most.

In part due to high internet penetration and fast internet speeds, the Korean online apparel market has continued to grow. Online apparel sales accounted for the fourth largest proportion of online shopping transactions, following food and beverages, home appliances, and food services. While offline fashion companies are facing a crisis, online fashion companies are recording sales growth despite the recession. Especially, the "big 5" fashion platforms including Musinsa, Zigzag, Ably, Brandi, and Wconcept have attracted young consumers. The total transaction value of the big 5 platforms was forecast to reach over 4.7 trillion South Korean won in 2021, with every platform growing in transaction value. Musinsa, the leading online fashion platform with a transaction value of approximately 2.3 trillion won this year, was recognized as the 10th unicorn company in Korea. Based on the increasing number of cross-border transactions and the growing popularity of K-fashion, the Korean apparel market is expected to grow further.

In the following 6 chapters, you will quickly find the 36 most important statistics relating to "Apparel industry in South Korea". 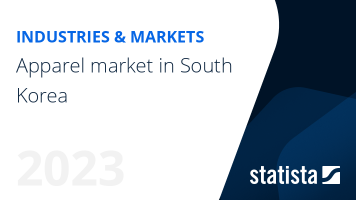 The most important key figures provide you with a compact summary of the topic of "Apparel industry in South Korea" and take you straight to the corresponding statistics.