South Korea is one of the best-connected countries in the world, with one of the highest average internet connection speeds worldwide and an internet penetration rate of over 90 percent since 2016, still increasing to this day. Naturally, the social media usage rate is high, especially among the younger generations.

Which social media services are popular in South Korea?

While domestic social media networks like Cyworld were dominating the early market, they gradually lost their status from around 2009 on and were overshadowed by simpler and international networks like Facebook, Instagram, and Twitter. Nevertheless, domestic social media networks are still quite popular today. The best example is BAND by Naver – it is a mobile community application that lets its users communicate in groups, organize offline groups and find new groups based on their interests. The features include boards, chats, calendars and photo albums. The app is one of the most used social media networks by South Koreans of all ages, but Naver Band enjoys great popularity with South Koreans aged 40 and above.
Another example for the popularity of local services is KakaoTalk. Although it is not well known globally, KakaoTalk is the most popular messenger in South Korea, used by the majority of all mobile messenger users. In 2012, the company launched its social media platform KakaoStory, which is connected to the messenger. In the beginning it had a rather high share of frequent users, but since then its popularity has decreased drastically.

The usage rate of social media platforms is especially high among the younger generations and social media platforms play a big part in their everyday lives. International platforms like Facebook and its subsidiary Instagram enjoy great popularity. In recent developments, Instagram’s user numbers are constantly rising and has surpassed Facebook in terms of user numbers. Worth mentioning is also the growing popularity of YouTube, with most South Koreans using it as their main video streaming application.

These days, any discussion about social media automatically leads to the fact that it is often used as a platform for so-called fake news. South Koreans have a relatively low trust in news in general, being among the countries with the lowest trust in news, according to Reuters’ latest Digital News Report. Nevertheless, the government is looking into ways of regulating the spread of fake news on social media. Given the country’s history with censorship, the public is concerned about this new movement.
This text provides general information. Statista assumes no liability for the information given being complete or correct. Due to varying update cycles, statistics can display more up-to-date data than referenced in the text. 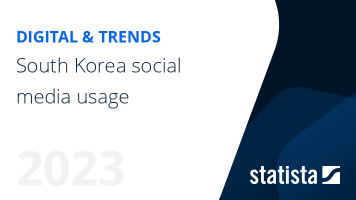 The most important key figures provide you with a compact summary of the topic of "Social media usage in South Korea" and take you straight to the corresponding statistics.