South Korea is known for having one of the fastest internet networks around the world. Paired with the high availability of high-speed internet, it is no surprise that 93 percent of South Koreans use the internet. The internet infrastructure has a high priority in numerous governmental regulations that led to its rapid and thorough expansion.

The government took an important role in the development of landlines and the expansion of the internet. The influence of the government on internet development has not been declining. Long before South Korea introduced 5G, the government formed a pan-governmental committee that included private companies and academic institutes. This meant that all those forces were supposed to work together to introduce 5G as fast as possible. In April 2019, South Korea introduced commercial 5G. At the end of 2021, 5G services had accumulated more than 20 million subscribers.

Since 5G contracts still use upswitching (meaning that users are connected to 4G except they use a 5G service), the base of the fast expansion is a strong 4G network – and South Korea has one of the best. Major operators provided close to a 100 percent availability of 4G networks. But as 5G becomes more common in use and availability, the number of 4G subscriptions slowly decreases and gives way to 5G options.

There are three major broadband internet providers: KT Corporation, SK Broadband, and LG Uplus. KT Corporation was the market leader with the most subscriptions to high-speed internet among all providers. KT Corporation started as a state-owned telephone company in 1981 but was privatized in order to fuel competition in 2002.

The leading mobile internet carrier however was SK telecom, which belongs to the same conglomerate as SK broadband. It held the majority of mobile subscription, surpassing both KT and LG U+ by a large margin of at least 12 thousand subscriptions. SK telecom also secured its market leading position when it comes to 5G once again. While all major operators recorded steady increases in 5G subscriptions, SK telecom managed to pull away early after its introduction and held the first place ever since. Even though SK telecom had the lowest number of base stations, the network had the highest experienced 5G availability among users.
This text provides general information. Statista assumes no liability for the information given being complete or correct. Due to varying update cycles, statistics can display more up-to-date data than referenced in the text.

Internet penetration among the population in South Korea in
97.57% 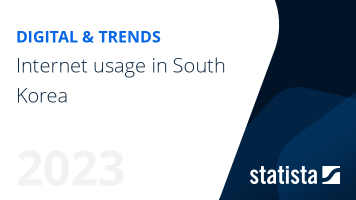 The most important key figures provide you with a compact summary of the topic of "Internet usage in South Korea" and take you straight to the corresponding statistics.