Published by Statista Research Department, Jun 15, 2022
K-pop is a global phenomenon, experiencing high levels of popularity around the world. One of the main reasons for K-pop's global popularity is the prominence of highly choreographed performances and its use of trendy styles. This also makes the genre well-suited for video platform viewing, making K-pop music videos and related video content popular on platforms such as YouTube. Supported by the South Korean government, the so-called Korean wave, referred to as "Hallyu" in Korean, has started to spread even further, with K-pop gaining a global audience. Apart from South Korea, the homeland of K-pop, Asian and American audiences were evenly distributed in terms of K-pop video consumption on YouTube.
During the last two decades, the K-pop entertainment market was dominated by the “Big 3” K-pop entertainment agencies: SM Entertainment, YG Entertainment, and JYP Entertainment. SM Entertainment has traditionally taken the lead in terms of size, number of artists, and revenue. SM is also regarded as having led the proliferation of the K-pop phenomenon around the world with prominent K-pop artists such as Girls’ Generation, EXO, SHINee, and Red Velvet. Singer BoA and boyband TVXQ became the first K-pop idols to successfully break into the Japanese market. YG Entertainment’s leading K-pop groups are BIGBANG, BLACKPINK, WINNER, and iKon, while JYP Entertainment manages TWICE, Stray Kids, ITZY, and many more. The K-pop dominance of the Big 3, which has remained unchanged for nearly two decades, has recently expanded to the ‘’Big 4’’, with the arrival of HYBE Corporation, formerly known as Big Hit Entertainment. Thanks to its globally popular artist BTS, HYBE generally posts the highest revenue and profits among the Big 4. BTS is a K-pop group comprised of seven young Korean men, first formed in 2013, and are widely considered the most popular K-pop artists. They regularly break their own records in album sales and YouTube viewership. BTS are still gaining fans around the world, and these fans formed the “ARMY”. The continuous growth of their fandom is a major driving force behind BTS’ record-setting. The BTS concerts held in Seoul in 2019 were estimated to have generated almost one trillion South Korean won as economic value to the country and attracted 187 thousand foreign visitors to Korea.

One popular and easy way of accessing K-pop content is via online platforms such as YouTube and Spotify. This makes it easy for existing fans to continuously consume content, while the threshold for people unfamiliar with the industry to begin consuming music, videos, and other content is low, allowing for more and more people to listen to the music. Accordingly, the amount of money spent per month on K-pop content over the world has doubled and stood at 10.8 U.S. dollars per person in 2021. Consumers who spent the highest average amount on K-pop content lived in the United Kingdom, and spent around 25.3 U.S. dollars per month in 2021.

In the following 6 chapters, you will quickly find the 26 most important statistics relating to "K-pop and big 4 entertainment agencies in South Korea".

The most important key figures provide you with a compact summary of the topic of "K-pop and big 4 entertainment agencies in South Korea" and take you straight to the corresponding statistics. 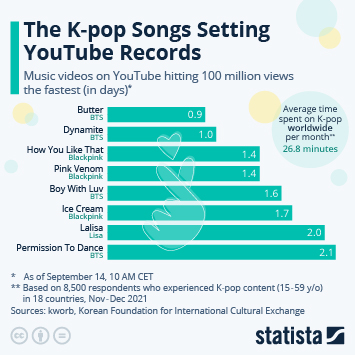 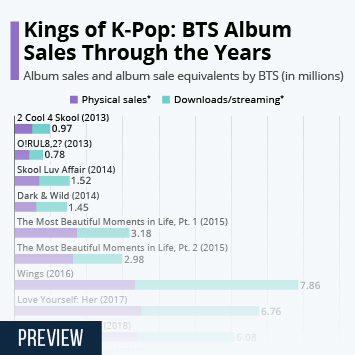