It is often difficult to tell when someone is having suicidal thoughts. If you suspect a family member or friend is contemplating suicide, it is important to voice concerns in a calm, non-judgmental, non-confrontational manner. In 2021, around 4.5 percent of males and 5.2 percent of females in the United States reported having serious thoughts of suicide in the past year. Warning signs among those having suicidal thoughts may include talking about death, expressing feelings of hopelessness and loneliness, withdrawing from social activities, behaving aggressively or recklessly, and suffering dramatic mood swings. Suicidal thoughts, plans, and attempts are much more common among those with drug or alcohol dependence or those who have suffered a recent major depressive episode. In 2021, around 32 percent of U.S. adults with a major depressive episode in the past year had serious thoughts of suicide, compared with just 2.4 percent who did not have such an episode.

Factors that increase the risk of suicide include mental illness, substance abuse, chronic disease, childhood trauma, social loss, the loss of a job, and a lack of treatment for mental health issues. However, there is usually no single reason why someone takes their own life. Recent data from the Centers for Disease Control and Prevention (CDC) show that almost 50 percent of those who die from suicide have a diagnosed mental illness. Furthermore, around 27 percent of suicide victims had a crisis around the time of their death, while 21 percent had a physical health condition. In the United States, the most common method of suicide is by firearm. There were 24,292 suicide deaths involving firearms in 2020, compared with 12,495 deaths involving suffocation, which was the second most common suicide method. Firearms are the most common method of suicide for both men and women in the United States, but this method is much more common among men. Firearms, poisoning, and suffocation account for an almost equal share of suicide deaths among women.

If you are having suicidal thoughts, or you know someone who is, it is essential to seek help. Many countries have suicide crisis or prevention lines that offer free advice and support in such situations. If you live in the United States, you can reach the Suicide & Crisis Lifeline by simply calling 988 to receive free and confidential support 24/7.
This text provides general information. Statista assumes no liability for the information given being complete or correct. Due to varying update cycles, statistics can display more up-to-date data than referenced in the text.

John Elflein
Research expert covering health and health care
Get in touch with us now
Published by John Elflein, Jan 17, 2023

Lifetime odds of dying from select causes in the U.S. in 2020

Suicide-related hospitalizations among adults in the U.S. 2013-2021

Death rate from suicide in the U.S. by gender and age 2019

Distribution of U.S. suicide deaths with select mental illness in 2019, by gender 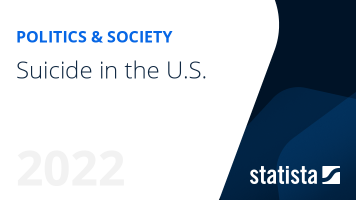 Go to report Suicide in the U.S.
Top Seller

The most important key figures provide you with a compact summary of the topic of "Suicide in the U.S." and take you straight to the corresponding statistics.