Published by
Federica Laricchia,
Apr 20, 2022
We hear about drones every day and might be thinking of getting one ourselves to record some epic birds-eye visuals of our lives, from a vacation to events like weddings. The term drone commonly refers to any remotely piloted aircraft (RPA) of various forms and different degrees of autonomy, under the control of a human pilot or with the ability to perform fully autonomous flights. The United States Department of Defense (DoD) and the United States Federal Aviation Administration (FAA) adopted the term unmanned aircraft system (UAS) to define aerial drones in 2005. This was later adopted by other governmental agencies worldwide to emphasize the importance of different elements involved rather than a narrow focus on just the aircraft for the development of regulations.
Drones are at a stage where they are still continuously evolving, as well as workable laws to regulate their use. Overall, the global drone market is forecast to grow considerably in the coming years, reaching a market size of 279 billion U.S. dollars by 2032. Moreover, drones are deployed in many countries worldwide, with China and the United States leading the market.

Major drone market segments include defense, commercial, public safety, law enforcement, and logistics, to name but a few. However, the drones that we are in the closest contact with in our daily life belong to the consumer drone market. These types of drones are often small in size and use much fewer complex systems to control and navigate than drones used in the defense and commercial sectors. One of the significant drone manufacturers is DJI (Da-Jiang Innovations) from Shenzhen, China. DJI makes some of the most popular consumer drone product lines from basic to advanced models starting from 300 euros. The latest development in the consumer drone sector is FPV (first-person view) racing. The pilot has an immersive flying experience through augmented reality (AR) goggles that display the live view from a drone camera with very low latency.

Where else are drones commonly used?

The rapid evolution of drones began with the development of defense technologies to remotely pilot an aircraft with weaponized and non-weaponized systems. They are critical for deployment in environments that are deemed dangerous for human-piloted planes and mainly consist of larger drones weighing several kilograms. Today, smaller drones weighing under a kilogram are used by some government agencies dealing with the monitoring of operations, from mapping in precision agriculture to monitoring or assisting in complex situations such as security threats attended by the police.

Commercial drones with industrial applications help monitor telecommunication towers or utilities like water lines, electricity grids, and telephone networks, as well as maintain or aid site inspections in mining operations. Recently, these commercial drones are being implemented as prototypes in the logistics and transportation sector, from moving cargoes to transporting people in air taxis.

In the following 6 chapters, you will quickly find the 36 most important statistics relating to "Drones".

The most important key figures provide you with a compact summary of the topic of "Drones" and take you straight to the corresponding statistics.

Drone insurance in the United States 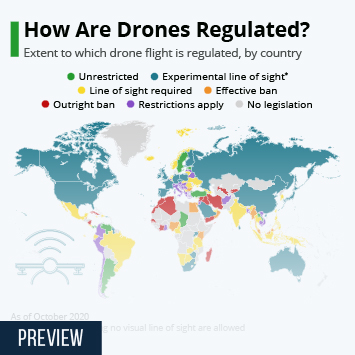