By 2050, the forecast age distribution of the European population predicts that the largest share of Europeans will be aged 60 to 64 years old. Therefore, the old-age dependency ratio in European countries (share of people aged over 65 per hundred people of working age) is expected to drastically increase. In 2019, the share of Europeans aged 65 and older who had long-term limitations, such as mobility limitations, reached 33 percent. Healthcare already represents an important cost for European countries. As of 2019, the healthcare expenditure as a share of GDP in many European countries exceeded 10 percent. Long-term residential care accounts for a non-negligible part of this healthcare. In 2018, the share of long-term residential care in Europe’s healthcare expenditure amounted to 10.2 percent. In the Netherlands, long-term residential care even reached 27 percent of its healthcare expenditure. These factors will ultimately require European health care systems to redesign elderly care and especially residential care.

As of 2018, the number of long-term care beds in European nursing and residential care facilities varied greatly. For instance, Sweden and the Netherlands had both over 1.3 thousand long-term care beds in nursing and residential care per hundred thousand inhabitants, while some other European countries had less than 100 beds, such as Bulgaria, Greece, or North Macedonia. By 2030, the bed stock of European nursing home real estate is forecast to be lacking. The lack of nursing home beds was notably forecast at 320 thousand beds in Germany and 250 thousand beds in Belgium. Although European residential care will have to address these issues, to this day, elderly care in Europe relies heavily on informal care. In 2020, an estimated 3.2 million Italian elderly care recipients potentially received informal care while home care recipients and institutional care each accounted for 75 and 35 thousand Italian recipients.

The care home market in Europe

In 2020, the leading European care home operator in terms of facility number was the French operator Korian, followed by the British operator HC-One. With approximatively 79 thousand beds, the leading European care home operator in terms of bed number was, however, Orpea. These three care home operators each generated revenue of around three to four billion euros in 2019. During that year, HC-One was the leading European care home operator in terms of revenue, with a turnover of 3.8 billion euros. As European countries have different healthcare and social systems, care home ownership in Europe is therefore diverse. Care homes in countries such as the UK or Italy are mostly private for-profit structures, while those in the Netherlands or Germany are also mostly private yet not for profit. Finally, in the Nordic countries, most care homes are publicly owned. Unsurprisingly, countries with higher privatization of care homes also show the highest costs. As of 2019, the average monthly cost for care homes reached three thousand euros a month in the UK, as compared to 1.3 thousand in Sweden.
This text provides general information. Statista assumes no liability for the information given being complete or correct. Due to varying update cycles, statistics can display more up-to-date data than referenced in the text.

Share of residential care in total healthcare expenditure in Europe (2018)
10.2%

The need for residential care

Residential care in the midst of the COVID-19 pandemic 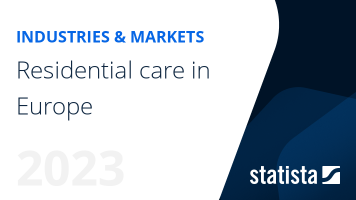 The most important key figures provide you with a compact summary of the topic of "Residential care in Europe" and take you straight to the corresponding statistics.

Costs and ownership of care homes in Europe