Published by
C. Simionato,
Jan 11, 2022
Formerly called "linge de corps" in France, or body linen, lingerie was the term used to designate all women's undergarments and nightwear. The term began to include men's underwear in its definition in the 1990s, and today the lingerie industry has become a lucrative market in France.

While the lingerie and underwear market has tended to increase in value in recent years, the COVID-19 crisis, as with many other sectors, has impacted lingerie and swimwear retailers. Between January and July 2020, the French fashion and textile market had lost more than 21 percent of its value compared to the same period the previous year, and the category of items that suffered the most from containment and store closures was swimwear. The women's swimwear category had lost more than 28 percent of its value, while the decline in the value of men's swimwear sales reached almost 30 percent.
Thus, as soon as the first closures were announced, many stores tried to contain their costs and obtain the aid necessary for their financial stability. During the containment period, more than three quarters of lingerie stores took the necessary steps to obtain business solidarity funds; others resorted to social aid, in particular short-time working for the sales teams, and/ or obtained the cancellation of social charges. Sales, however, seem to have recovered, and when asked about it in May 2021, only four percent of lingerie retailers said they had not been concerned.

The "No Bra" trend, amplified by the lockdown

Regarding the consumption and habits of the French in terms of lingerie, the containment seems to have reinforced certain trends, already at work for several years, in particular that of "No Bra", or bralessness. The proportion of women who abandoned their bra during containment was four times higher than before it. However, although feminists in the 1960s had erected the bra as a symbol of women's oppression in clothing, the motives of these "No Bra" followers seem to be dictated more by a desire for comfort (53 percent) than by a real sensitivity to feminist discourse, even if some explain their choice by the desire to fight against the sexualization of women's breasts.
Despite a return to more "normal" living conditions, the number of young "No Bra" enthusiasts remained almost as high as during the containment period (20 percent in April, compared to 18 percent in June), a sign that this new practice has taken hold among young French women.

In the following 5 chapters, you will quickly find the 40 most important statistics relating to "Lingerie and underwear in France". 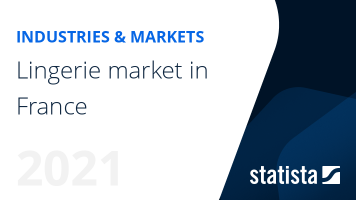 The most important key figures provide you with a compact summary of the topic of "Lingerie and underwear in France" and take you straight to the corresponding statistics.

Clothing and accessories in France

Second-hand apparel and textiles in France