Published by
D. Tighe,
Nov 17, 2022
Europe is home to some of the most lucrative markets for apparel and clothing worldwide, as well as some of the largest apparel companies. In 2021, the United Kingdom had the third highest revenue of apparel markets worldwide, at a value of over 76 billion U.S. dollars. This made it the highest earning clothing market in Europe, followed closely by Germany. Women’s and girl’s apparel is responsible for the largest share of the European apparel market revenue overall, making up well over half of the market.

The European Union is the region which imports the most clothing worldwide by quite some distance, with almost a quarter share of world imports. It ranked as the second largest exporter of clothing goods, quite some way behind China, where many clothes are manufactured. With many companies in Europe choosing to outsource production to China and other cheaper locations across the world, the number of textile and clothing manufacturing companies in the European Union has fallen over the past years. Despite this, the turnover of this industry has not shown such steep decline, although numbers did drop in 2019.

Many of Europe’s most popular fashion brands are among the leading clothing companies worldwide in terms of brand value. Based on clothing companies’ turnover in Europe alone, Inditex of Spain comes out on top, with a turnover of around 12.9 billion euros in 2020, followed by H&M of Sweden and Zalando, which is based in Germany. Inditex is responsible for several well-known clothing brands, including Zara, Bershka, Massimo Dutti and Pull & Bear. As many brick-and-mortar stores were closed during the coronavirus pandemic, the revenue of fashion e-commerce in Europe grew considerably in 2020. Its popularity among consumers is forecast to continue to grow rapidly, which benefits online fashion companies such as Zalando. Zalando’s revenues reached over ten billion euros in the 2021 financial year.

In the following 5 chapters, you will quickly find the 27 most important statistics relating to "Clothing and apparel market in Europe".

Statistics on the topic
Projected revenue of the apparel market worldwide in 2025
1.84bn USD
Germany's ranking in the largest apparel markets worldwide by revenue
6th
Leading country for the fashion industry according to Brands IPX
France 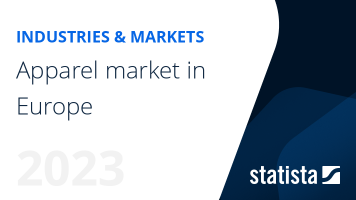 The most important key figures provide you with a compact summary of the topic of "Clothing and apparel market in Europe" and take you straight to the corresponding statistics.

Textiles and clothing industry in Turkey 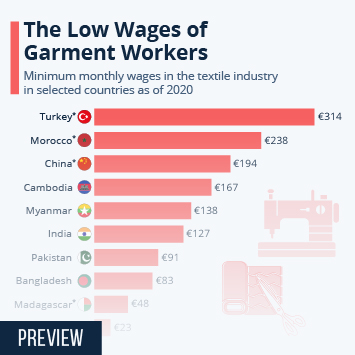 The Low Wages of Garment Workers 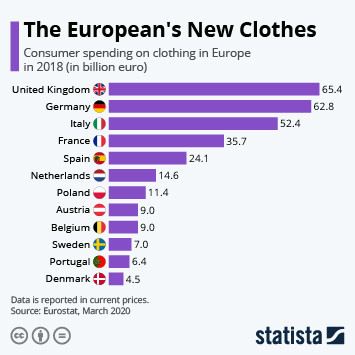