Children born second or third in a family probably experienced a logic followed by many parents whereby new clothes are bought for the eldest and then passed on to the youngest, the last link in the family clothing supply chain. While second-hand is described nowadays in the media as a new trend, this model of circular consumption has been around for a while. Second-hand clothes shops existed long before ready-to-wear, and in the 19th century, Paris was the hub of the second-hand clothing trade. However, this market has been experiencing significant growth in recent years, and second-hand seems to be a standard for many French people.

Although France is not among the world's leading exporters of used apparel, it had exported more than 1.7 million tons of used textile articles and rags in 2019, and recorded a trade surplus of almost 60 million euros that same year. This rise is noticeable in terms of consumption: more generally, the share of French people buying second-hand products is almost twice as high as it was ten years ago, the number of used car acquisitions continues to increase, and more than half of the population own second-hand furniture.

The most obvious explanation seems to be a financial one: in an uncertain economic situation where the end of the month is sometimes a difficult time, it would seem incongruous to ignore used objects when many are sold almost new at a tiny fraction of their initial price. This lower cost is in fact the first motivation of most French people. In addition, the development of online platforms has undoubtedly contributed to this growth: second-hand marketplaces such as Vide Dressing or Vinted have seen their popularity take off in recent years.

Buying used clothes is a must for consumers eager for alternatives to fast fashion. Fashion remains one of the most polluting industries, and this environmental argument, though probably more relevant among the wealthy classes, provides another explanation for the development of the second-hand market.
The environmental and social impacts of fast fashion are indeed taken into account by the French, some of whom show their willingness to break with the hectic rhythm of clothing consumption. The rise of this consumption model could thus point out the irrelevance of the old one.

The current popularity of second-hand clothing is also part of the broader "slow life" movement, and could be symptomatic of a different relationship to time and objects. Second-hand items, by their nature, seem to arouse curiosity. Signs of alteration on old clothing caused by its history guarantee its uniqueness and could stimulate the enthusiasm of the French, whose desire for distinction seems to be cultivated in a society of reproduction where everything appears to be manufactured in series.
This text provides general information. Statista assumes no liability for the information given being complete or correct. Due to varying update cycles, statistics can display more up-to-date data than referenced in the text.
Published by Statista Research Department, Sep 12, 2022

Market share of second-hand fashion retailers at the end of the lockdown
17.1%

Market shares of online fashion retailers in France 2021, by type

Second-hand purchases by category in France 2022 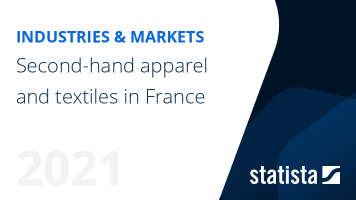 The most important key figures provide you with a compact summary of the topic of "Second-hand apparel and textiles in France" and take you straight to the corresponding statistics.