Renewable energy is currently experiencing substantial development in Spain. With the goal of reaching climate neutrality by 2050, the country is implementing measures to achieve a 100 percent renewable electricity mix by that year. Although wind is currently the most used renewable resource in the Mediterranean country, solar energy is growing at a very fast pace. In fact, the solar capacity installed has tripled in the last three years. In 2021, Spain was the seventh country worldwide in terms of new capacity additions.

Solar energy is expected to continue this accelerated growth in the next few years. The renewable auctions planned by the Spanish government will award at least 1.8 gigawatts of solar photovoltaic energy per year to interested parties until 2026. In the case of solar thermal energy, this figure stands at roughly 100 megawatts per year. Furthermore, thanks to a decrease in the cost of solar technologies, the subsidy-free market is becoming increasingly competitive.
Corporate power purchase agreements (PPAs), a type of contract in which energy developers receive funding from third parties, are also growing in Spain. The country is currently considered one of the most attractive markets in Europe. It has, together with Sweden and Denmark, the cheapest and more competitive prices per megawatt. During the first quarter of 2021, this amounted to 34 euros per megawatt hour.

The installed capacity for self-consumption of solar energy has also seen a big growth in Spain. In 2021, a total of 1.2 gigawatts for self-consumption were added to the available PV capacity in the country, twice the amount registered in the previous year. This addition elevated the total self-consumption capacity in the country to more than 2.7 gigawatts.
This has been possible thanks to the changes in legislation introduced during 2018 and 2019, when the administrative and economic barriers associated with the installation of solar panels for self-consumption were significantly reduced. Regarding the different Spanish regions, the Community of Madrid has the largest potential for solar photovoltaic self-consumption, with a forecast of roughly 2.1 gigawatts by 2030, followed by Andalusia and Catalonia.
This text provides general information. Statista assumes no liability for the information given being complete or correct. Due to varying update cycles, statistics can display more up-to-date data than referenced in the text.
Published by Lucía Fernández, Oct 14, 2022 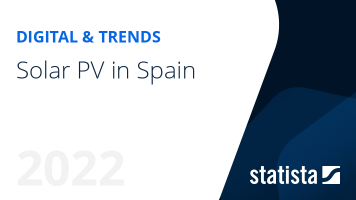 The most important key figures provide you with a compact summary of the topic of "Solar energy in Spain" and take you straight to the corresponding statistics.