Published by
J. Clement,
Oct 18, 2022
The United Kingdom (UK) is one of the biggest gaming markets in Europe. Video games are a popular entertainment option and the number of digital video game users in the UK is projected to reach 51.88 million in 2025, up from 44.3 million digital gamers in 2021. Already a mainstream activity before the global coronavirus pandemic, gaming has surged in popularity in 2020 300521 with approximately 62 percent of the UK population currently playing games on any device, up from 39 percent in 2019.

Gamer demographics in the UK

An October 2020 to January 2021 survey of UK adults aged 16 years and older found that 92 percent of respondents aged between 16 and 24 years had ever played video games, up from a 73 percent gaming penetration among the same age group in the previous year. Overall, gaming uptake increased in 2020 due to the global COVID-19 pandemic and related stay-at-home mandates which caused previous non-gamers to turn to new at home entertainment options. In the same period, the share of female adults in the UK who identified as gamers overtook the share of male gamers for the first time with a 63 and 61 percent gaming penetration rate respectively.
When comparing UK gamers to other gaming audiences in Europe, the age distribution of gamers in the United Kingdom is most like those in Germany. Both markets are at a similar stage of maturity.

Gaming device reach in the UK

Recent survey data indicates that mobile phones are the most popular gaming device in the UK. With the vast variety of games, comparatively low price point, and easy access, it is hardly surprising that mobile gaming is increasingly popular among all age groups. Currently, over half of UK adults aged 16 to 44 years play games on their mobile phone, with usage tapering off to 45 percent among 45 to 54 year olds. Consoles are also among the most popular platforms for gaming in the United Kingdom, with the COVID-19 boost among female UK console gaming audiences being particularly apparent for the most recently observed period.

Online gaming in the UK

The possibilities to connect with other people via in-game socializing are bigger than ever and have started to appeal to gamers of all ages and backgrounds.
As such, online gaming is increasing in popularity – in early 2021, 52 percent of gamers in the United Kingdom were found to play games online with or against other people. Online gaming is especially popular among gamers aged 16 to 24 years – nearly three quarters of gamers in that age group enjoy connecting with wither players online, with male UK gamers being more likely to do so than female players. Leading online games include battle royale titles Fortnite and PUBG, as well as shooter series Call of Duty, cooperative games like Overcooked or Minecraft, or RPG titles including Final Fantasy XIV or World of Warcraft.

In the following 8 chapters, you will quickly find the 43 most important statistics relating to "Video gaming audiences in the United Kingdom (UK)". 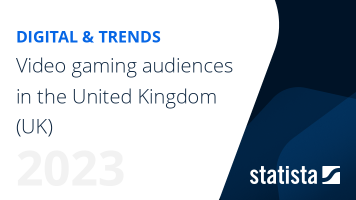 The most important key figures provide you with a compact summary of the topic of "Video gaming audiences in the United Kingdom (UK)" and take you straight to the corresponding statistics.