In spring 2020, gaming quickly emerged as one of the most popular activities during the initial outbreak of the global COVID-19 pandemic as user engagement and spending surged between February and April of that year. Especially younger generations Gen Z and Millennials spent more time on gaming as the medium was a convenient way to spend time during initial stay at home orders, lockdowns, and social distancing.

Looking back at gamer spending in 2020, worldwide digital gaming spending on in-game content and paid downloads has increased by 12 percent and 21 percent respectively, highlighting the growth of digital revenues. Physical sales of video games have been declining over the past few years and high street closures and the avoidance of physical retail spaces have further boosted digital and e-commerce gaming sales. Nearly all major gaming companies generated most of their recent revenues via digital content. For the most recent fiscal year, Cyberpunk 2077 developer CD Projekt posted 91 percent digital revenues and even industry mainstay Nintendo, despite having strong performing gaming hardware segment, still reported a respectable 42.8 percent digital revenue share for the year.
This development is not only due to COVID-19 – the industry has continuously making inroads to live service revenues and in-game monetization. However, during the last year, gamers have used these services at an unprecedented volume and the exceptional situation has led many holdouts to finally embrace digital purchases.

As of June 2020, time spent video gaming during the COVID-19 pandemic increased by double digits in all regions, with Latin American gamers increasing their time spent on video games by 52 percent. Asia-Pacific was ranked second in terms of increased user engagement with a 42 percent increase of gaming time. Multiplayer games proved especially popular during COVID-19, and the most popular gaming genres based in increase in time spent were fighting, MOBA, and battle royale games. A survey of European gaming audiences found that playing video games during lockdown made players feel less isolated and happier overall. Especially online multiplayer players felt positive about their gaming experiences during lockdown periods.

Popular games during the pandemic

Some 2020 game releases were at the right place at the right time – Nintendo’s island simulation game Animal Crossing: New Horizons was launched in March 2020 and instantly became a smash hit. The game sold 13.4 million units in its first six weeks and currently stands at 32.6 million lifetime sales, making it one of the best-selling Nintendo Switch titles of all time. Another 2020 success story was PC multiplayer title Fall Guys: Ultimate Knockout, which generated 11 million unit sales between August and December 2020.

In 2020, the global number of gaming video content viewers surpassed 1.2 billion, up from 944 million 2019. The most popular streaming platform to watch gaming livestreams is Twitch, followed by YouTube Gaming and Facebook Gaming. Gaming livestreams are inherently social as the ability interact with streamers and other viewers via chat enhances the shared feeling of experiencing a game together.

In 2020, Twitch audiences watched over 1 trillion minutes of video content. This is almost double the amount of time spent in 2019, where viewers watched approximately 660 billion minutes’ worth of content. During COVID-19, streaming platforms did not only reach new viewers but also increased the number of streamers putting out video content. The active number of streamers on Twitch stands at 9.36 million as of April 2021, compared to 7.2 million streamers a year ago and 3.9 million in January 2020.
This text provides general information. Statista assumes no liability for the information given being complete or correct. Due to varying update cycles, statistics can display more up-to-date data than referenced in the text.

Gaming during lockdown in Europe 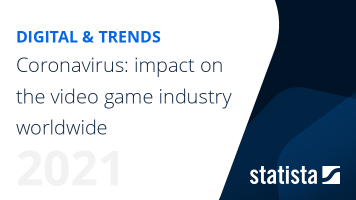 The most important key figures provide you with a compact summary of the topic of "COVID-19 impact on the gaming industry worldwide" and take you straight to the corresponding statistics.