Published by Emma Bedford, Sep 8, 2022
Like with many other industries and consumer segments, the coronavirus pandemic caused shifts within the pet world. Needing more comfort at home during nationwide lockdowns and having more spare time due to restrictions on out-of-home activities may be just two reasons that pet ownership increased in the UK in 2021. It was recently estimated that around 62 percent of households in the UK owned at least one pet.

As the pet population has increased in size, so has the amount of money that consumers spend on their pets. Consumer spending on pets and related products reached an all-time high of 9.66 billion GBP in 2021, almost double the figure which was spent on pets ten years previously. The cost of owning a dog in the UK was estimated reach an average of 1,875 GBP per year. Major costs included boarding, pet insurance, and food. These three categories amounted for over 50 percent of total annual expenditure. The average annual insurance costs for dogs vary widely by the type of policy taken out. For example, the average cost of a lifetime policy was around 332 GBP, while accident only cost around 64 GBP.

Popular pets in the UK

Dogs most recently ranked as the most popular type of pet in the UK. According to a survey, just over one-third of UK households owned at least one dog. Cats followed in second place, with the share of UK households owning a feline friend reaching 28 percent. Indoor birds and rabbits trailed in joint third place, with between two and three percent of households owning either. Dogs make their owners happy, and this feeling of happiness is the leading reason for getting a dog. As pet owner’s lives gradually return to normal with less time spent at home and more time spent at the office or travelling, the recently witnessed growth in pet ownership may slow down.

In the following 5 chapters, you will quickly find the 29 most important statistics relating to "Pet ownership in the United Kingdom (UK)". 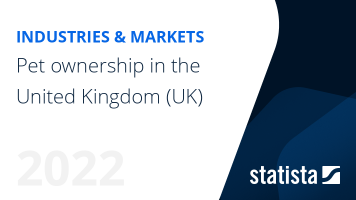 The most important key figures provide you with a compact summary of the topic of "Pet ownership in the United Kingdom (UK)" and take you straight to the corresponding statistics.

Pet insurance in the UK

Pet ownership in the United States