Published by
Alexandru Arba,
Oct 24, 2022
Japan opened its first railroad in 1872 between Shinbashi in Tokyo and Yokohama. Since then, the railway industry has radically influenced the course of people’s life and their country. Japanese railway systems, infrastructure, and rolling stock move many million tons of cargo via conventional rail and - perhaps more importantly - billions of passengers. The kinds of rolling stock are manifold, including rapid transit, like metros and monorails, or the widely recognized Shinkansen, one of the longest high-speed railways globally.

In 1964, the first Shinkansen commenced operations, vaporizing the travel time to three hours and ten minutes between the countries’ two populous regions Kanto and Kansai. Nowadays, the fastest Tokaido Shinkansen merely needs two hours and 21 minutes and runs almost as precisely as the clockwork.
The total network has six more lines beside the Tokaido. The latest line opening was the Nishi-Kyushu Route of the Kyushu Shinkansen in September 2022. Oncoming additions to the high-speed railway network will be an extension of the Hokuriku Shinkansen by March 2024 and an extension of the Hokkaido Shinkansen to Sapporo by March 2031.
The suppliers of the respective Shinkansen trains are domestic rolling stock manufacturers - Nippon Sharyo, Hitachi, Kawasaki Heavy Industries, The Kinki Sharyo, or Japan Transport Engineering Company. Some of their high-speed models also serve on regional express railways. Hence, these lines carry the name Shinkansen although they formally do not count as such because their top operating speeds stay below 200 kilometers per hour.

The landscape of railway operators in Japan

Among the 211 domestic railway operators, the Japan Railways (JR) Group companies originating from the state-owned Japan National Railways (JNR) are the largest. Following a breakup and partial privatization in the 1980s, JNR evolved into six regional JR passenger companies and several other entities, including a railway freight company. Five of the six passenger JR companies operate Shinkansen. While JR East, JR Central, JR West, and JR Kyushu have undergone complete privatization, JR Hokkaido and JR Shikoku still belong to an independent administrative agency. Yet, the JR Group is treated distinctly from public operators and private railways, which transport even more passengers. These private railways have a history almost as old as the national railway. The largest include Tokyu Corporation, Hankyu Hanshin Holdings, and Kintetsu Group Holdings, which engage besides in real estate, department stores, and many other services. Private railways have accordingly assumed the role of urban developers.

In the following 6 chapters, you will quickly find the 35 most important statistics relating to "Railway industry in Japan". 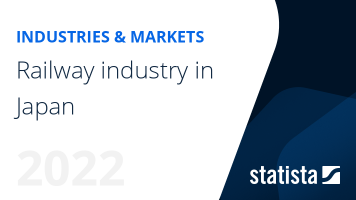 The most important key figures provide you with a compact summary of the topic of "Railway industry in Japan" and take you straight to the corresponding statistics.