Ever since the 17th century, cafes have played an integral role in fostering a sense of community in France. Beyond the espressos and café crèmes, coffee houses have typically served as a space to unwind and socialize after a long day. In France, finding a coffee shop to relax in would not be a difficult feat, since the number of coffee establishments in France was around 15 thousand in 2020. That year, the combined retail sales of cafes and coffee shops in France exceeded 1.6 billion euros, with cafes generating over 80 percent of the market’s total revenue. Meanwhile, a breakdown of the retail sales value of coffee in France showed that more than half of coffee sales could be traced to catering services in the country in 2020.

Who is the average coffee consumer in France?

Impact of COVID-19 on the French coffee market

With the important role that cafes play in the French society, it comes as no surprise that a vast amount of coffee is consumed in the country. To cater to the demand, total coffee imports of France have exceeded 200 thousand metric tons every year between 2016 and 2020. Despite the popularity of coffee in France, the coronavirus (COVID-19) pandemic did pose challenges for the sector, with revenue of the French coffee market dropping sharply in 2020 over the previous year. In this respect, a Statista Consumer Market Outlook study identified that the average price per unit of coffee in France was nearly eight euros lower in 2020 than in 2019, signifying the impact of the health crisis on the French coffee market.
This text provides general information. Statista assumes no liability for the information given being complete or correct. Due to varying update cycles, statistics can display more up-to-date data than referenced in the text.
Published by Statista Research Department, Jan 11, 2022

Leading coffee shop chains in France 2021, by number of stores

Average price of an Espresso in the main coffee shop chains in France
1.84 EUR

Average price of a regular drink at coffee shop chains in France 2019, by coffee type

Leading coffee shop chains in France 2021, by number of stores

Number of Starbucks in France 2021, by city 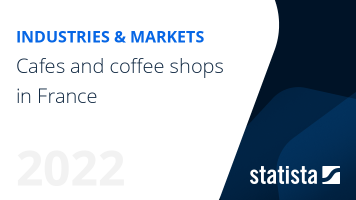 The most important key figures provide you with a compact summary of the topic of "Cafes and coffee shops in France" and take you straight to the corresponding statistics.