Published by S. Lock, Dec 3, 2020
Cafés and coffee shops are a part of the quick service restaurant market in the United Kingdom, along with bakery and sandwich shops. Over the last decade there has been an increasing trend in the number of coffee shops operating in the UK, including independent operators and non-specialists. The UK coffee shop market however is still dominated by the three leading coffeehouse chains: Costa Coffee, Starbucks and Caffè Nero.
Costa Coffee is a major British multinational coffee shop chain, ranking as the biggest coffeehouse chain in Europe. Over the years, Costa’s store numbers have dramatically increased, although presence is still highest in the UK, where Costa’s store count reached 2,422 in the fiscal year ending in 2018.

Despite Starbucks ranking below Costa in the UK market, within Europe the international coffeehouse giant still has the largest presence in Britain. In terms of favorite coffee shops, Caffè Nero tends to have a better reputation than both Starbucks and Costa among many UK consumers. There are however a number of other coffee shop and sandwich bars that users visit: In 2017, 10.6 million people used local coffee shops compared to over 19 million saying they used Costa.

Brits are keen coffee drinkers, with 79 percent of UK consumers drinking coffee seven days a week. When asked where they usually drink coffee, 90 percent of consumers said at home, compared to 41 percent in a café and 26 percent in a coffee bar. According to one study, 5.3 million people visit coffee shops and sandwich bars once a week to drink.

In the following 4 chapters, you will quickly find the {amountStatistics} most important statistics relating to "Cafés and coffee shops in the United Kingdom (UK)".

The most important key figures provide you with a compact summary of the topic of "Cafés and coffee shops in the United Kingdom (UK)" and take you straight to the corresponding statistics.

Coffee shop usage in the UK

Restaurant and food service trends in the UK 2017 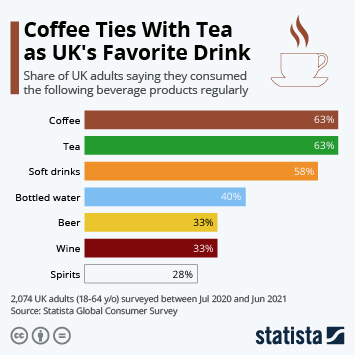