Coffee shops and cafes in the U.S. - statistics & facts

Published by Statista Research Department, Nov 21, 2022
Coffee shops and cafes come in a variety of forms but, traditionally, they are establishments selling prepared coffee, tea, and other hot beverages. In simple terms, the line between coffee shop and cafe is actually coffee itself. Coffee is generally the focus of coffee shops, while cafes tend to place a greater emphasis on food products. In 2020/2021, the total coffee consumption worldwide amounted to approximately 166.63 million 60kg bags of coffee. One country in particular that stands out for its love of coffee is the United States. In 2021, the revenue of the coffee market in the U.S. was nearly 82 billion U.S. dollars and the number of coffee shops in the U.S. reached 38.4 thousand.

What is the biggest U.S. coffee shop chain?

In recent years, many coffee shop and cafe chains have grown large enough to compete with the giants of the wider restaurant industry. In 2021, when looking at systemwide sales, the leading bakery cafe chain in the U.S. was Panera Bread. However, Panera Bread is vastly outsized by another U.S. chain, Starbucks, the largest coffeehouse chain worldwide. In 2021, the global brand value of Starbucks came only second in size to the quick service restaurant giant, McDonald’s. That being said, Starbucks’ net revenue worldwide fell in 2020 as a result of the coronavirus (COVID-19) pandemic. Despite the setback, the company still accounted for 19.16 billion U.S. dollars in revenue. The company even saw an increase in the number of Starbucks stores worldwide in 2020, with approximately 33,660 stores across the globe. In 2021, Starbucks’ revenue grew to 24.61 billion and the company recorded an all-time high in number of stores.

How much do U.S. consumers spend on coffee?

In the following 4 chapters, you will quickly find the 21 most important statistics relating to "Coffee shops and cafes in the U.S.". 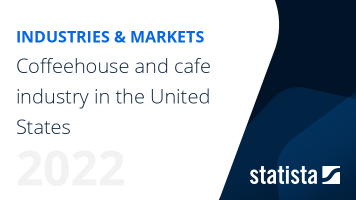 Go to report Coffee shop and cafe industry in the U.S.
Top Seller

The most important key figures provide you with a compact summary of the topic of "Coffee shops and cafes in the U.S." and take you straight to the corresponding statistics.

Restaurants in the U.S.