Published by
Daniel Slotta,
Apr 29, 2022
Semiconductors are one of the key parts of the modern global economy. As outlined by the current global chip shortage it becomes clear that a lack of semiconductors impacts production in almost every industry. The size of the chip industry is small, but unlike other important commodities such as grain or oil, the chip sector encompasses a small group of regions and companies. The most notable and significant member of the group is Taiwan. However, on the background of the coronavirus pandemic, competition of global superpowers, and military conflict, the region faces challenges on the world stage as well as to its domestic economy.

The global semiconductor supply chain relies on a segmented global network of suppliers and manufacturers. The United States is home to fabless companies, with Japan and the Netherlands building semiconductor equipment, and Taiwan taking on the assembly and testing process. While producing semiconductors is easy, achieving high-end quality is not and the region is home to the most advanced semiconductor manufacturers in the world. This puts Taiwan in a uniquely advantageous position. Caught in the power struggle between two global superpowers, the island is indispensable to both. Therefore, for Taiwan, the semiconductor industry is not only of economic importance but also a national security factor.

At the technological forefront is the region’s largest and most notable semiconductor company, TSMC. It is not only is the largest chip design and manufacturing enterprise in Taiwan but also the world’s largest supplier of semiconductors. In 2020, TSMC had a global market share of 54 percent and had an impressive client portfolio. With over 25 percent, Apple accounted for the largest share of the company’s revenue. Apple collaborates with TSMC to develop its computer chips that power the latest generation of MacBooks after the tech company ditched Intel in 2021. This shows TSMC’s large production capacities along with the technical know-how to manufacture cutting-edge products.

A global diversification strategy and the environmental impact of the industry will force the Taiwanese semiconductor industry to adapt to a new reality. As a response to supply chain disruptions from the coronavirus pandemic and geopolitical tensions, China, the United States, and Europe have invested in developing their own domestic semiconductor industries. This will be effective only after building necessary infrastructure, acquiring technology, and finding talent - all of which are in short supply.

A more pressing issue for Taiwan though, is the impact that semiconductor manufacturing has on the environment and its effects on the local population. Producing chips is a very resource and energy-intensive process. The electricity consumption of TSMC alone accounts for around five percent of the region’s energy use and consumes 156 thousand tons of water every day. As Taiwan faced a shortfall of rain in recent years, TSMC began bringing in water via trucks. As a result, the question of whether Taiwan is capable of meeting the world’s demand for semiconductors depends not only on the manufacturing capacity and supply chain stability but also on its ability to absorb the negative externalities.

In the following 6 chapters, you will quickly find the 29 most important statistics relating to "Semiconductors in Taiwan". 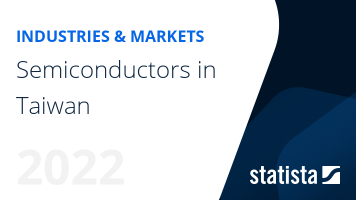 The most important key figures provide you with a compact summary of the topic of "Semiconductors in Taiwan" and take you straight to the corresponding statistics.