Micron’s business offering includes a range of products and services, split across five reportable segments. Business units of the company include the compute and networking, mobile, storage, and embedded device markets. Micron’s key technology provision consists of dynamic random-access memory (DRAM) products and NAND products. In 2021, sales from DRAM products accounted for more than 20 billion U.S. dollars, up from the 14.5 billion U.S. dollars recorded in the previous year.

Micron ranked fourth among semiconductor companies in 2021, behind market leaders such as Intel and Samsung. Micron faces intense competition in the semiconductor memory and storage markets, notably from firms including Kioxia, SK Hynix, Samsung, and Western Digital. Within the global DRAM market, Micron typically ranks third among these companies, while within the global NAND market Micron’s position has hovered around fifth place.

To ward off competition and continue to innovate, the company is expected, along with other major semiconductor companies, to invest heavily to increase manufacturing capacity and supply existing and new demand. Micron has expressed its intention to capitalize on the funding on offer as part of the Biden-Harris Administration's CHIPS and Science Act to increase U.S. semiconductor manufacturing capacity. In total, Micron said it would invest up to 40 billion U.S. dollars in U.S.-based memory fabrication plants by 2030, creating an estimated 40,000 new jobs in the process. This includes the 15 billion U.S. dollar investment in a new semiconductor manufacturing facility in Idaho.
This text provides general information. Statista assumes no liability for the information given being complete or correct. Due to varying update cycles, statistics can display more up-to-date data than referenced in the text.

Thomas Alsop
Research expert covering the global hardware industry
Get in touch with us now
Published by Thomas Alsop, Sep 12, 2022 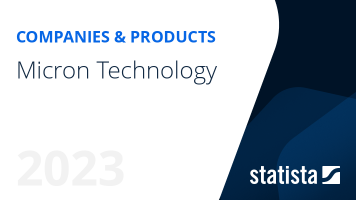 The most important key figures provide you with a compact summary of the topic of "Micron" and take you straight to the corresponding statistics.