At close to six million, the number of mobile phone connections in New Zealand exceeds the country's population. Following global digital trends, consumers in New Zealand are increasingly choosing to upgrade their mobile phones to smartphones. Smartphones have advanced features that allow users to access mobile internet, take high-quality photos and videos with built-in cameras, and download apps for various activities such as media consumption, gaming, banking, and online shopping. Due to lockdowns and the coronavirus pandemic, supply issues seemed to heavily affect smartphone sales in 2021, particularly as New Zealand consumers rely almost exclusively on imports of smartphones.

Taking a bite of the Apple

The leading smartphone vendors in New Zealand were Apple, Samsung, Huawei, and Oppo. Apple iPhones dominated nearly 50 percent of the market. In the year to September 25, 2021, Apple NZ reportedly exceeded one billion New Zealand dollars in revenue for the first time, despite pandemic-related supply issues. While Apple and Samsung have continuously topped the market over the years, attractive smartphone offerings from Huawei and Oppo have led to greater market competition. In terms of operating systems, iOS and Android were the most used mobile operating systems in the country, with Android holding a slightly larger market share.

The primary mobile service providers in New Zealand are Spark, Vodafone, and 2degrees. Each has its own mobile network, with slight differences in coverage in cities that are more noticeable in rural and remote areas. Of the three, 2degrees seemed to have the highest share of satisfied mobile customers. As of early 2022, all three now offer 5G wireless broadband to varying degrees of coverage. Kiwi consumers' need for faster and more reliable mobile internet is reflected in the average monthly mobile data usage, which has continued to increase. With digitalization on the rise, the demand for mobile internet among consumers and businesses will likely continue its upward trajectory. Mobile service providers will need to continue modernizing their networks and improving coverage to keep up and remain competitive.
This text provides general information. Statista assumes no liability for the information given being complete or correct. Due to varying update cycles, statistics can display more up-to-date data than referenced in the text.
Published by L. Granwal, Aug 8, 2022 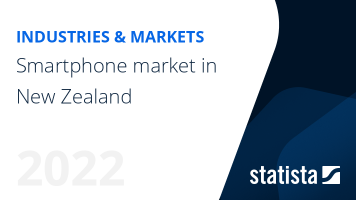 The most important key figures provide you with a compact summary of the topic of "Smartphone market in New Zealand" and take you straight to the corresponding statistics.