88.9k
Ukraine, Syria, Iraq, the Islamic State, Yemen, Libya, Boko Haram – the world seems to be steeped in violence these days. Pretty much everywhere, you can hear and read the phrase, "This is as bad as it gets" - broadcast on TV, written in the newspapers and repeated by friends. However, that isn't quite true. As a matter of fact, it has almost always been worse than it is today.

As Bill Clinton once remarked, "Don't follow the headlines, follow the trend lines!", because a look at recent death tolls shows that this world has never been a more peaceful place than during the first decade of the new millennium.

Since 1945, what looks like a huge mountain range of war battle deaths has been levelling out. The infographic pictured below shows the number of deaths per 100,000 people per year. The post-war period rightfully carries its name, as a bigger share of mankind is living through a sustained period of peace, before dying of old age.

Why then are so many people still under the impression that the world is a more violent place than ever?

One reason is increasing media coverage: while today's wars are broadcast live, constantly remaining in the public eye, reports on conflicts of earlier decades – such as the various Congo Wars with hundreds of thousands of casualties – did not reach equally big audiences.

What is true and terrible, however, is the fact that the number of war deaths has recently been on the rise again, mainly due to the ongoing conflict in Syria. Nevertheless, the present is not nearly as bloody as the nineties, eighties, seventies or sixties were before.

This chart and text was first published by German journalist and author Guido Mingels. It is available as a book here. This post is brought to you in collaboration with German news magazine DER SPIEGEL. As always, our charts are free to use and share, just quote DER SPIEGEL/Statista as the source and include a backlink to the graphic's URL (this page). 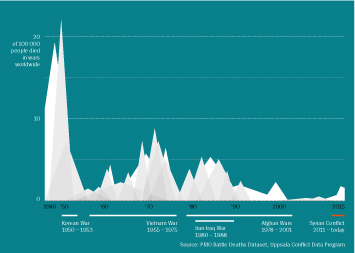