Parcel shipping is a booming business, relying on e-commerce shoppers for increased volume and revenues. While the coronavirus pandemic brought about another boost for global parcel volumes, figures by mailing services company Pitney Bowes suggest that growth in the sector already followed a steep trajectory previously.

The reason for the continued steep growth is the dominance of China in parcel shipping volumes. More than 83 billion parcels, almost two thirds of the global total, are currently shipped in China. The country's e-commerce sector has been expanding rapidly even before the pandemic and continued to do so during the global health crisis.

Other countries did in fact see a pandemic boost in shipping volumes. In the U.S., 17 percent more parcels were shipped in 2019 than in 2018. Between 2019 and 2020, that increase was 37 percent. Similar effects were visible in the UK and Germany, where a previous annual growth of 11 percent and 6 percent, respectively, grew to 32 percent and 11 percent in the pandemic. Japan, a country with a shrinking population, has seen parcel shipments stagnate for a while - suggesting, however, that volume and spend per resident are increasing slowly.

There were 131 billion parcels shipped worldwide in 2020, according to Pitney Bowes. The figure tripled in the past six years and is expected to double again in the next five.

This data includes parcels that were shipped from business-to-business, business-to-consumer, consumer-to-business and consumer consigned shipments with a weight up to 31.5 kg (70 pounds). 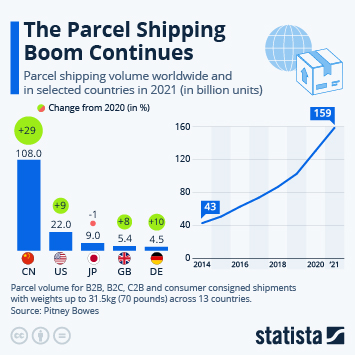 This chart shows parcel shipping volume worldwide and in selected countries in 2020.