88.9k
Venture capital funding in the United States reached its highest level since the turn of the millennium in the first half of 2019. According to PwC and CB Insights’ quarterly MoneyTree Report, U.S. venture capital funding climbed to $55 billion in the first six months of 2019, the second highest recorded total since the peak of the dot-com boom in 2000. Meanwhile, the number of completed deals dropped to the lowest level since 2013, a trend that was offset by an increase in $100+ million mega-rounds, of which a record number of 112 were completed in the first half the year. With 64 such deals completed between April and June alone, the second quarter set an all-time record in terms of $100+ million rounds.

Despite the fact that venture capital funding is edging towards levels previously seen shortly before the internet bubble burst, another crash doesn’t seem imminent. As opposed to the dot-com era, the current surge in investment volume is mainly driven by large deals involving later-stage companies with proven track records.

Internet companies profited most from the surge in VC funding, drawing a total of $22.6 billion in the first half of 2019. Healthcare and Mobile & Telecommunication startups were the other main beneficiaries, receiving $8.8 and $5.9 billion in venture capital, respectively. Meanwhile the number of unicorns, i.e. vc-backed companies valued at $1+ billion, reached a new high. According to PwC and CB Insights, the U.S. unicorn population climbed to 167 by the end of the second quarter, despite several large-scale exits in recent months. 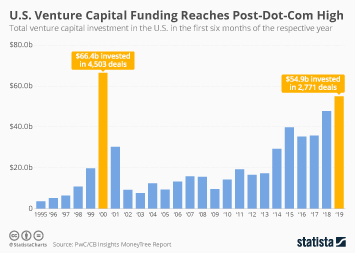 This chart shows the aggregate value of venture capital deals in the United States.