88.9k
There's a pretty hefty gender gap in U.S. federal prisons, and prisons and jails in general. According to the most recent numbers published by the Federal Bureau of Prisons (BOP), 93.2 percent of the approximately 185,500 federal inmates are men, and only 6.8 percent are women. This gap becomes all the more astonishing when you compare the stats to the makeup of the general population.

Federal prisons only hold around 9 percent of the overall people incarcerated in the United States. Other institutions holding inmates are state prisons and local jails. However, less recent figures released by the Bureau of Justice Statistics (BJS) from 2015 show that this ratio was similar for the overall U.S. prison and jail population (90.6 male to 9.4 female) two years ago.

There are studies that indicate that men aren't necessarily more criminal by design but there indeed is an institutional bias against them. For example, men are regularly given much longer sentences and "female arrestees are also significantly likelier to avoid charges and convictions entirely, and twice as likely to avoid incarceration if convicted."

Federal prisons tend to hold more inmates convicted of white collar crime, but also hold many people incarcerated for drug related crimes such as possession and also trafficking (49.5 percent in 2015). Most convicts in state prisons have been sentenced for violent crime, such as murder, manslaughter, rape or robbery (52.9 percent in 2014). 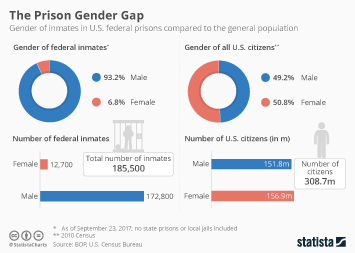 This chart shows the gender of inmates in U.S. federal prisons compared to the general population