40k
57k
41k
9.6k
Manchester's housing market is booming. In 2013 there were 928 residential units under construction in the city. Flash forward to 2017 and, according to Deloitte's Crane Survey, that figure has hit 11,315. The huge demand for homes is underlined by the speed at which they are bought. Home Owners Alliance analysis of property sales around the country in December ranked Manchester as one of the places in which houses are sold the fastest - sellers can expect to have come to an agreement with a buyer in an average of 36 days.

Great. There is though, one quite significant problem. As research by The Guardian shows, of the almost 15 thousand residential units granted planning permission in Manchester in 2016/17, precisely 0.0 percent of them could be classed as 'affordable'. Amid a 'relaxed attitude towards developers' on the city council's part, the apparent fear of not attracting large construction and regeneration projects to the city is one factor in the disregard for new affordable homes. Another is a the potential trade-off on quality.

Adam Higgins, head of development company Capital & Centric said: “Ultimately as a private sector developer the only way you can build it cheaper is to build poorer quality and what everybody is paranoid about doing, including the council, all credit to them, is to start repeating the mistakes of the 1960s. Look at Grenfell Tower and places like that”. Perhaps though, example should be taken from the likes of Cardiff. In 2016/17 the Welsh city granted permission for 12,085 new units, 24 percent of which will be 'affordable'. 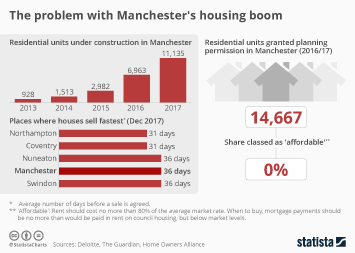 This chart brings together key figures on residential construction in Manchester, UK.