Published by Statista Research Department, Nov 9, 2021
Despite the coronavirus (COVID-19) pandemic, the European residential real estate market saw an unprecedented boom in the past year and a half. The first lockdowns in 2020 brought the global economy to a standstill, but as restrictions eased, the strong demand for housing led to house prices skyrocketing. In the Netherlands, Austria, Sweden, Hungary, and Germany house prices rose by 10 to 15 percent between the second quarter of 2020 and the second quarter of 2021, while in Estonia and Denmark, price growth exceeded 15 percent. Transaction prices of new housing units varied widely across different countries and cities. Unsurprisingly, Europe’s biggest economies – Austria, France, Germany, and the United Kingdom (UK) headed the ranking as the most expensive countries to purchase a home. Despite Brexit, London remains the priciest city for buying an apartment, with a square meter price of over 15,000 euros as of the first quarter of 2021.

The European housing market is diverse

The DACH countries (Switzerland, Germany, and Austria) have some of the lowest homeownership rates, with less than 60 percent of the population living in an owner-occupied home. In the Netherlands, Norway, and Sweden, the homeownership rate is much higher and over 50 percent of the population lives in an owner-occupied home with a mortgage. Besides affordability, the mortgage conditions are crucial when it comes to purchasing a home. As of the fourth quarter of 2020, interest rates in most European countries were below two percent, with Finland, Portugal, and Denmark boasting the lowest rates at under one percent. In comparison, interest rates in Romania and Hungary were over four percent.

Renting is an alternative

Whether it is because of affordability or a matter of choice, renting is common in the bigger European cities. The house price to rent ratio shows that house prices grow faster than rents. In Germany, the house price to rent gap widened by close to 33 percent between 2015 and 2020. A furnished one-bedroom apartment in Berlin cost on average over 1,300 euros in the third quarter of 2021 and in Paris, it was almost 2,000 euros.

In the following 4 chapters, you will quickly find the 22 most important statistics relating to "Residential real estate in Europe".

Statistics on the topic
Home ownership rate in Europe
69.8%
Country with the most housing completions per 1,000 citizens
Poland
Average transaction price of new housing in Austria
4.5k EUR per sq m

The most important key figures provide you with a compact summary of the topic of "Residential real estate in Europe" and take you straight to the corresponding statistics.

The real estate market in Europe

Residential real estate in the Benelux 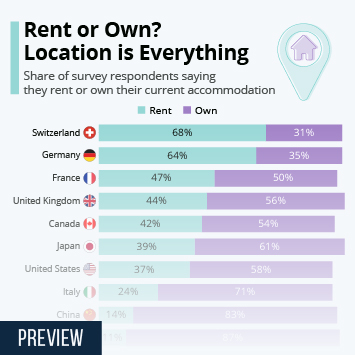 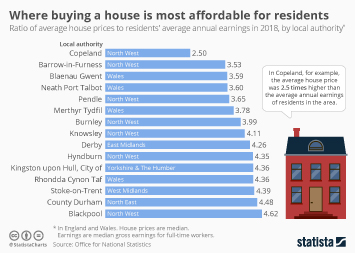